Season 5 trailer is “confusing, which means the show is daring and smart!” 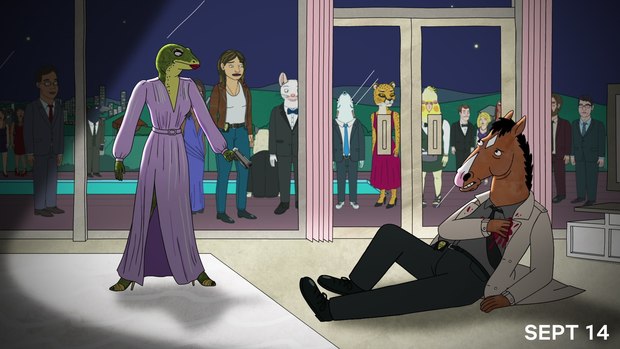 Season 5 of ‘BoJack Horseman’ arrives on Netflix on September 14.

Streaming giant Netflix has unwrapped a new trailer for the forthcoming Season 5 of its animated original series, BoJack Horseman.

The Emmy Award-nominated and critically acclaimed BoJack Horseman premiered on Netflix in August 2014 and will debut its fifth season on September 14. The series revolves around the titular character (voiced by Will Arnett), a legendary but fatally flawed former 90s sitcom star from the family-favorite sitcom Horsin’ Around, who has been trying to find his way through a muddle of self-loathing, whisky and failed relationships. Now, in the presence of his human sidekick Todd (Aaron Paul) and his feline agent and ex-paramour Princess Carolyn (Amy Sedaris), BoJack is primed for his comeback. The series also stars Alison Brie and Paul F. Tompkins.

The new trailer sees BoJack embarking on a new role as the lead character in a new show called Philbert, but his problems appear to be the same-old, same-old. “Are you okay? Are you going to be able to keep it together?” is the question on everyone’s minds, as “You say you want to get better and you don’t know how” echoes apocryphally in the background.

There’s also plenty of meta-commentary as Princess Caroline exclaims that the trailer is “confusing, which means the show is daring and smart!” Check it out in the player below: