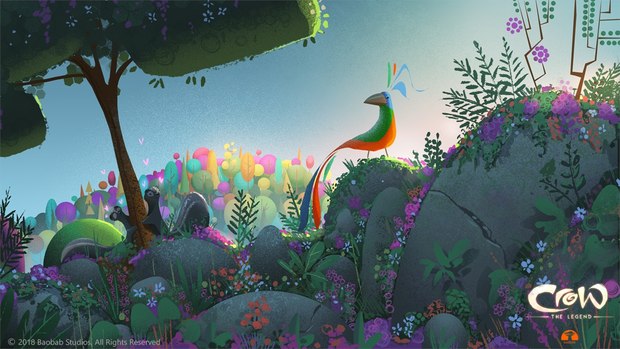 Virtual reality specialists Baobab Studios, the creators of the award-winning Asteroids! and Invasion!, have released a new trailer for their latest VR experience featuring an original song by John Legend. Available in both VR and theatrical formats, Crow: The Legend launches November 15 on YouTube and Oculus VR.

Written and directed by Baobab co-founder Eric Darnell of Madagascar fame, and produced by Maureen Fan, Crow: The Legend is inspired by a Native American tale about the origin of the crow, who, with his magnificent colors and beautiful voice, was once the most popular and admired animal in the forest. But when the very first winter arrives, Crow must make the ultimate sacrifice to save his friends and make the world a better place. Alongside Legend, who, in addition to singing and voicing the role of Crow also served as executive producer on the project, the voice cast includes Oprah Winfrey, Tye Sheridan, Diego Luna, Constance Wu, Lisa Koshy, and Native rights activist and tribal elder Randy Edmonds.

Created using the Unity game engine, Crow: The Legend has a distinct storybook look and feel. It premiered at the Tribeca Film Festival, and screened as an official selection at the Cannes NEXT VR film market. Crow: The Legend opens this weekend’s CTN Expo with a screening, reception and panel presentation with the creators at 5:00PM on November 15.