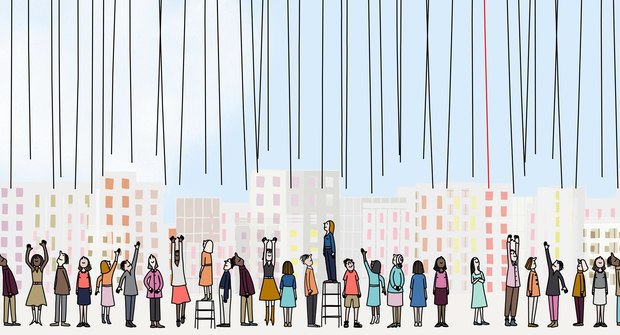 A year after the film was selected to screen at the Toronto International Film Festival, the NFB has made this beautiful tale of emotional attachment publicly available outside of Europe.

An intimate story with universal appeal, Threads eloquently portrays the notion of emotional attachment -- the bonds that we all need and form but that can also cause pain, making us feel alone or abandoned.

Through her two protagonists, Kove, a Montreal-based filmmaker originally from Norway, illustrates various rites of passage to explore the bond between mother and daughter, until that inevitable moment when the child leaves the nest. In the spare visual style she’s known for, Kove manages to capture all of the beauty and complexity of parental love.

Selected by prestigious international festivals such as Berlin and TIFF, Threads won a Special Prize at the Hiroshima International Animation Festival in August. In 2007, Kove won an Oscar for her animated short The Danish Poet, and in 1999 her first NFB film, My Grandmother Ironed the King’s Shirts, garnered an Oscar nomination. A children’s book adapted from this film was published last year.

Co-produced with one of Norway’s leading animation studios, Mikrofilm AS, Threads was produced by Mikrofilm’s Lise Fearnley and Tonje Skar Reiersen and by Michael Fukushima of the NFB’s English Animation Studio.

A children’s book adapted from the film and published by Firefly Books, the NFB’s official English-language publisher, will be widely available in bookstores on October 1. The book will be launched at a public event on Friday, September 14, at bookstore La Petite Librairie Drawn & Quarterly, 176 Rue Bernard Ouest. The filmmaker will be on hand to sign copies from 5 p.m. to 7 p.m.

To celebrate the online release of Threads, AWN has teamed with the NFB to give away eight Torill Kove-themed gift packs, including a signed copy of the book “Threads,” as well as “My Grandmother Ironed the King's Shirts,” and a notebook featuring artwork from the film. Head over the Animation World Network Facebook page for details, and enter to win today!