While college animation programs in the U.S. have historically skewed male, female enrollment at top schools has surged nationwide, especially in the last five years. 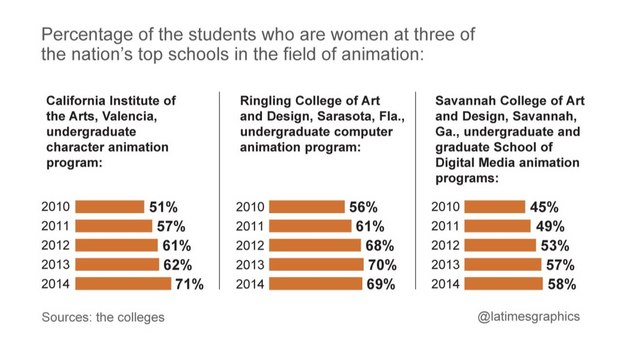 More women are flocking to careers in animation than ever before, according to a recent report by the Los Angeles Times. While college animation programs in the U.S. have historically skewed male, female enrollment at top schools has surged nationwide, especially in the last five years:

“When CalArts debuted its character animation program in 1975, it had just two female students. Today women make up 71% of its animation student body, and this month 16 women and 10 men graduated from the program. USC's John C. Hench Division of Animation & Digital Arts is now 65% women.

“UCLA's master's program in animation is estimated to be 68% women, and Florida's Ringling College of Art and Design's computer animation program is nearly 70% women.

“Valencia-based CalArts, co-founded by Walt Disney, has seen the gender divide widen in women's favor every year since 2010. The Savannah College of Art and Design in Georgia grew its female animation student body by 82% between 2010 and 2014, whereas the number of male students grew by 11%. At California College of the Arts in San Francisco, female enrollment in animation grew by about 20% during the same period.”

Yet, while nearly all of the 2014-2015 character animation students at CalArts are women, those numbers aren’t necessarily translating to real-world jobs. “Women make up 21% of the artists, writers and technicians employed under an Animation Guild contract this year,” the Times reports, citing hiring records for guild animation studios in Los Angeles County.

“They come out of art school and aren't hired for the creative jobs,” Marge Dean, co-president of the non-profit advocacy group Women in Animation, reportedly said. “They end up being PAs [production assistants] or on the production management track, the housekeepers and the organizers as opposed to the creators.”

Head over to the LAT to read the full story.