Winners to be announced in May during India’s Animation Masters Summit 2015. 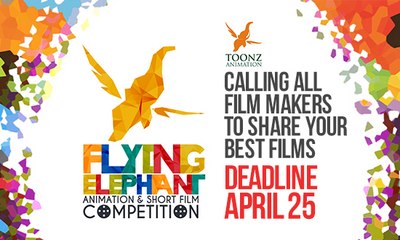 Trivandrum, India -- Toonz Media Group, the leading animation group is celebrating the ‘Art of Animation‘ by organising a two-day ‘Animation Masters Summit 2015’ from May 8-9, 2015 in Technopark, Trivandrum. Animators of national and international repute will convene in Trivandrum to share their experiences and expertise with passionate professionals and aspiring young talent.

This will be a platform for the young to interact with the Masters and an opportunity for the masters to present their works to other masters and also animation professionals expected to attend this event.

On receiving applications, the entries will be shortlisted by a 12-member panel. The panel will shortlist the total entries to the top 12 entries. The twelve shortlisted films will be then evaluated by the visiting Masters during the Animation Masters Summit. On May 9, 2015 the winners will be announced at the concluding ceremony of the Summit and the ‘The Flying Elephant Trophy’ will be awarded to the best films.

The last day for sending in application for the Flying Elephant competition would be April 25, 2015.

“It was in 1999 that Toonz first held the Week with the Masters event in Kerala. This was a great platform for animation enthusiasts and creative people to meet leading animators and interact with them. We want to continue this tradition and create a platform for dialogue amongst experts, industry and academia to chalk out a roadmap for animation industry in India.” Said P Jayakumar, CEO Toonz Media Group.

“The purpose of the Flying Elephant competition is to bring to surface, evolution and new tendencies of the Animation & Entertainment Industry and to showcase originality and excellence. The best forum to present this is one in which Animation Industry stalwarts from India and other parts of the world are here in God’s Own Country.” He added.