New ‘Captain America: 75 Years of the Sentinel of Liberty’ retrospective art exhibit runs through the summer; opening celebration to be held Friday, May 27th. 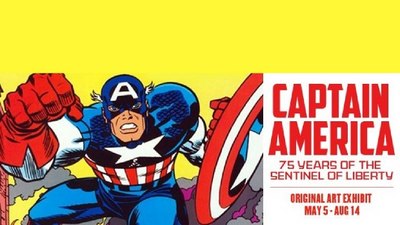 “This may be the coolest superhero original art exhibit we have ever had at the ToonSeum, with collectors from all over the country and Canada loaning us some incredible examples of Captain America art, showing how he has changed through the decades,” commented curator Stuart Neft.

There are very few first appearances of a character that makes a statement quite as strong as punching Adolph Hitler in the face, but Captain America did just that in his 1941 debut on American newsstands in CAPTAIN AMERICA COMICS #1. Since his inception, Captain America has continued to hold a metaphorical mirror to our nation’s politics and culture. Beginning with the Axis threat of World War II, Captain America has been present, helping us understand our complicated history with Communism, Viet Nam, Watergate, 9/11, the Patriot Act and beyond.

The idea of a character who can fully represent the nation in all of its many variations is difficult, if not impossible, to envision. Captain America, at his best, encompasses the entire spectrum.

Captain America: 75 Years of the Sentinel of Liberty runs through August 14. All U.S. military personnel and veterans receive free admission. The opening celebration is Friday, May 27th at 7pm.  Party admission is $10 and includes light snacks and beverages. Tickets are available here.