Tool recreates the fictional Colorado town of South Park in 3D, allowing anyone with an Oculus headset to explore its scrapbook streets, interact with characters and find hidden Easter eggs. 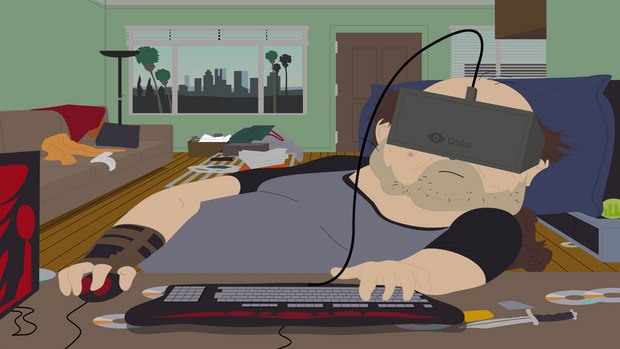 If it's been your lifelong dream to explore South Park in 3D, consider it realized thanks to a new Oculus Rift experience from Tool.

Over the course of a "few short weeks in June," the production company faithfully recreated the fictional Colorado town, allowing anyone with an Oculus headset to explore its scrapbook streets, interact with characters and find hidden Easter eggs.

Created for the Cannes Lions advertising festival, the “experience” uses a combination of flat cutout characters and more dimensional paper-textured buildings. Tool began work modeling the buildings of the city in Cinema 4D and laying out a rough version with placeholders in Unity.

Quite a bit of layering was done in order to achieve the desired look. Tool wanted to give the ground and streets some dimensionality beyond a 2D texture, so they created road plates at the base level and stacked sidewalk plates above these so as to create physical seams and imperfections. Utilizing Unity’s terrain feature, which would accept shadows and have more dimensionality, Tool painted up the snow through the streets and sidewalk layers. Working in tandem, the buildings were modeled and UV mapped in C4D, textured in Photoshop, exported as FBX files and added to the scene as they were completed. Additional elements were modeled and textured directly in Unity, such as fences, trees, and basketball goals. Tool also added the gang’s School Bus and Officer Barbrady’s police car on a set loop. Finally the rest of the 2D sprite characters were added.

While the experience is best suited for Oculus Rift owners, the cartoon landscape is also available inside your browser. Watch the video, below: