Animator Matt Danner and comics writer/illustrator Tony Millionaire team up to create a first look at a CG/live-action hybrid film adaptation of ‘Sock Monkey: Into The Deep Woods.’ 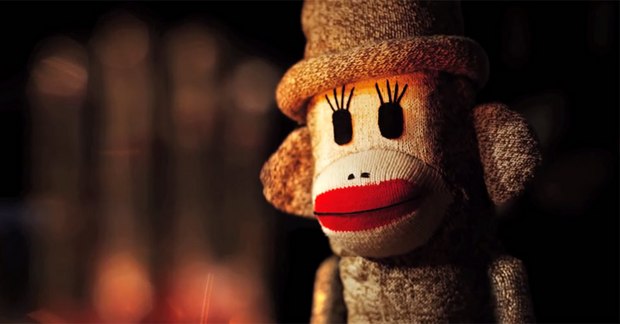 Animator Matt Danner and comics writer/illustrator Tony Millionaire (Maakies) have teamed up to create a first look at a film adaptation of Sock Monkey: Into The Deep Woods, as was first reported by Deadline.

The Fantagraphics storybook is the latest adventure in Millionaire’s Eisner Award-winning saga about a sock monkey named Uncle Gabby and his companion Mr. Crow. The story follows Uncle Gabby as he and his friends venture across land, sea and air to save their human, Ann-Louise, whom they fear has been kidnapped by a vicious monster.

The Sock Monkey project was initially envisioned as a film, but when Danner wrote the treatment as a children’s book, Millionaire’s publisher Fantagraphics agreed to publish it in print form first. The book arrived on shelves November 16.

The teaser was shot over the course of one day with a small crew. Using five different “digi-nette” puppets on a practical set, they shot live-action footage which was later blended with CG to create a surreal look and feel.

Danner wrote the script for the film -- meant for families but with “real danger and gravity” -- and will direct the CG/live-action film. Danner, who got his start working for Ren & Stimpy’s John Kricfalusi while still in high school, has directed episodes of The Looney Tunes Show, Xiaolin Showdown, and the stop-motion animated WWE Slam City. He’s currently directing an animated Hot Wheels feature trilogy for Mattel and has a series pilot in development at Nickelodeon.