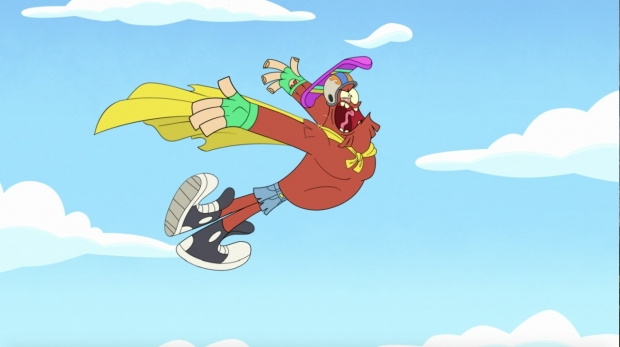 The folks at Nickelodeon have shared a clip for a very special upcoming episode of Middlemost Post guest staring Tony Hawk, coincidently named “Hawk Man,” premiering Thursday, August 11 at 2:00 p.m. (ET/PT). The series follows a former rain cloud, a brawny mailman, and their magical pet walrus as they deliver packages to the unusual inhabitants of Mount Middlemost.

In the new episode, Parker meets Hawk Man, Mt. Middlemost’s resident daredevil, who hung up his “cape” after an extreme jump went wrong. But now, with Parker’s help, this Evil Knievel will find the courage to face his fears and regain the fire to attempt his biggest jump ever!

“I’m excited to be voicing the character Hawk Man in Middlemost Post!” shared Hawk. “It’s important to share that not everyone can be perfect all the time, and I hope that Hawk Man can inspire kids to face their fears and challenges through perseverance and determination.”

In the sneak peek, Hawk Man relives his darkest moment, the one that made him hang up his cape - check it out: