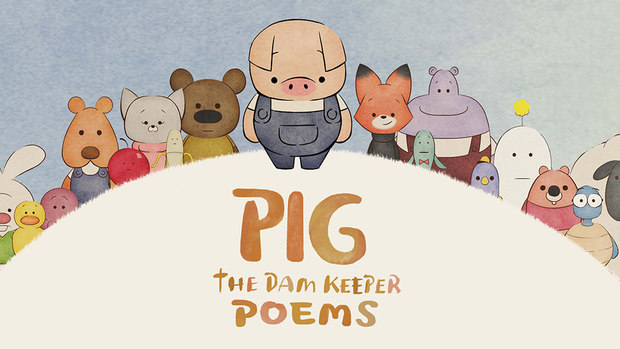 Here’s a treat: for a limited time only animation studio Tonko House has released a full episode from its hand-drawn animated kids series, The Dam Keeper Poems, online!

Previously only available in Japan via production partner Hulu, The Dam Keeper Poems is based on the studio’s 2014 Oscar-nominated short film The Dam Keeper. Directed by former Pixar artists Robert Kondo and Dice Tsutsumi, The Dam Keeper tells the story of Pig, an introverted youth who lives in a windmill and keeps a dark fog from engulfing his town. Although socially rejected by his peers, he is befriended by the artistic Fox.

The Dam Keeper Poems is a 10-episode series written and directed by Tonko House’s Erick Oh, who also served as Animation Supervisor of the original short film. Seen through Pig’s youthful perspective, with abstract and surreal visuals, the dialog-free series is centered around the friendship between Pig and Fox as Pig remembers how he became the Dam Keeper.

For a very limited time only, you can watch a full episode from the series in the player below:

The Dam Keeper Poems comprises more than 31,000 frames, all individually hand-drawn and painted. According to the Tonko House website, the production took eight months, and was completed by a team of Dam Keeper veterans and new faces alike. Tsutsumi, Kondo and Zen Miyake serve as executive producers. The series recently picked up an award for best animated series at the 2018 Annecy International Animated Film Festival.

Tonko House is also releasing the second in a trilogy of graphic novels featuring the characters from The Dam Keeper on July 10. The first book was nominated earlier this year for the prestigious Eisner Award.

The Dam Keeper is also being adapted into a CG-animated feature directed by Kondo and Tsutsumi and produced by former Blue Sky Studios producer Kane Lee.