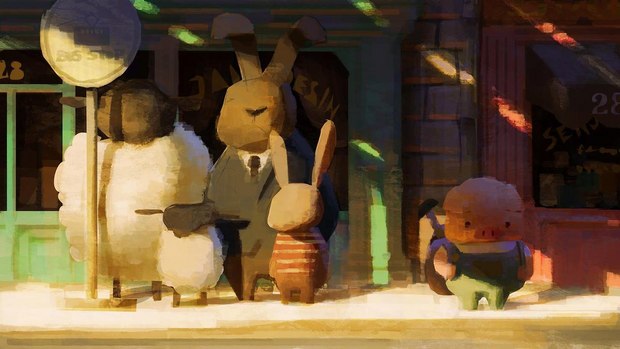 Dialogue-free 2D-animated short film ‘The Dam Keeper’ was nominated for an Academy Award in 2015.

LOS ANGELES -- Tonko House and 20th Century Fox Animation have announced that they are partnering to develop a feature film based on The Dam Keeper, the 2015 Academy Award-nominated animated short written and directed by Tonko House founders Robert Kondo and Daisuke “Dice” Tsutsumi.

Kondo and Tsutsumi, former art directors at Pixar (Toy Story 3, Monster’s University, Ratatouille) will direct the feature film, which will be distributed worldwide by 20th Century Fox. Kane Lee, an independent producer formerly of Jane Startz Productions and Blue Sky Studios, will lead produce. The Tonko House team developed a pitch deepening and expanding the characters and world of the much-beloved short film, which 20th Century Fox Animation executive Darlene Caamaño Loquet has shepherded and will continue to oversee for the studio. Screenwriter John Henry Hinkel, originally brought aboard by Tonko House, has joined the project as well

We are thrilled to be in business with Tonko House and honored to help develop their groundbreaking short into a feature,” said Fox Animation president Vanessa Morrison.

”Since we began working on the story for a feature set in the world of The Dam Keeper, we wondered who the right partners would be to help us take the next steps with Pig and Fox and guide us in introducing them to audiences in this rapidly changing world,” Kondo and Tsutsumi said in a joint statement. “We feel that 20th Century Fox, with both its longstanding track record and the exciting direction it’s headed, is the ideal home for our characters. We are so excited about the risks we are taking together and the new storytelling possibilities that exist.”

The Dam Keeper feature film picks up several years after the events of the short film and addresses the most intriguing questions viewers pondered following the short. In a departure from the dialogue-less 2D short film, which created a painterly look with more than 8,000 digital paintings, this newest production will have full dialogue and is intended to be made primarily in CG, with early animation tests already developed under the supervision of Tonko House.

“We are thrilled to return to making CG-animated feature films, having worked for over a decade at studios like Pixar and Blue Sky,” added Kondo and Tsutsumi. “We’re hungry to stand out in the crowded CG animation market and believe we can achieve something new. With Tonko House’s cultural roots being in Japan, it’s possible that we may be able to bridge both East and West to bring out the best of both animation traditions.”

This announcement comes off the heels of other exciting news from the ever-expanding universe of The Dam Keeper. Kondo and Tsutsumi are currently in the midst of writing and illustrating a trilogy of graphic novels, Volumes 1-3 of The Dam Keeper, the first of which will be released in 2017 by First Second Books, an imprint of Macmillan. Also announced last week is a deal with Hulu in Japan to produce a 10-episode series centering on the friendship between the beloved characters Pig and Fox from the short. Set to air in the Summer of 2017, the series will be directed by Tonko House’s most recent hire, Erick Oh, formerly of Pixar (Finding Dory, Inside Out) and the Animation Supervisor of the original short film The Dam Keeper