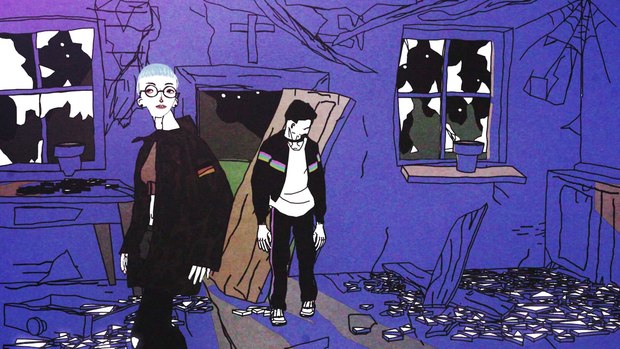 The GLAS Animation Festival has wrapped up its fourth edition, which was held March 21-24 in Berkeley, CA, handing out awards at a gala ceremony held on Sunday night. In addition to the Grand Prix, which was awarded to Acid Rain By Tomek Popakul, prizes included the FXX Elevation Award and the Vimeo Staff Pick Award.

The 2019 FXX Elevation Award was given to filmmaker Sophie Koko Gate and her film Slug Life. Sponsored by FX Networks, the FXX Elevation award highlights one filmmaker in competition at the GLAS Animation Festival whose film demonstrates FX values of fearless storytelling, compelling characters, and a distinct point of view on the human condition. The winner receives a $25,000 all-in development and production deal with FX Networks to produce and air their next animated short film.

“This year’s FXX Elevation Award winner is a filmmaker with unmistakable vision. Her film succeeds because of its instantly distinctive visual style and impossibly imaginative storytelling. It is delightfully surreal, surprisingly funny and -- albeit through artificial intelligence, industrial dance moves, and some suggestive slugs -- offers a unique woman’s perspective into the most human of desires: finding somebody to love,” the network commented about the award. “FX is proud to present Sophie Koko Gate and her film Slug Life with the 2019 FXX Elevation Award. We’re excited to see what she comes up with next!”

The Vimeo Staff Pick Award, presented for the first time ever at the GLAS Animation Festival, was given to Kelsi Phung and Fabien Corre for their short film Les lèvres gercées. This unique award invites short filmmakers selected for GLAS to submit their film for consideration directly to Vimeo’s curation team. Phung and Corre will receive $2,500 cash and the online launch of their film as a Vimeo Staff Pick.

“With natural performances and realistic dialogue, this moving short shines a light on how a lack of understanding and acceptance between a parent and their LGBTQ child can have devastating consequences,” commented the Vimeo Staff Pick Award jury in bestowing the award. “Its sensitive approach to this important topic is one that is vital to share for the betterment of our world.”

The full list of winners at GLAS 2019 with comments by the juries is shown below:

“Boy meets girl in a psychedelic zone -- with a camper van. Shifting relationships and extraordinary performances weave complicated patterns both strange and familiar.”

“Using multiple techniques, this strong and delicate narrative makes us feel the flesh and minds of adolescents and their transparent existence.”

“This film not only took a unique technical risk by using a stark color palette and strictly defined space, but honestly laid bare the personal struggles of its main character. Calculated, dark, disturbing and vulnerable, we were impressed by its blunt portrayal of one woman’s inner conflict with herself.”

“What struck me the most about this story was its blatant, desperate call to action. While a woman pleads with her ex to help her bring another person to this world, she is oblivious that her planet will not exist much longer -- not for her and certainly not for her future child. Framing climate change as a horror story in a clever, scary and disturbing way is perhaps the only way to get people to listen, and I applaud this film for delivering its vital message with such a creative yet urgent tone.”

“For its mastery of the historic and difficult technique of the pin-screen, its emotional storytelling, and tender expression.”

“Complicated cut-out characters come and go as a restaurant scene moves relentlessly in one direction. Red light streams outside as the waiter chases the fly again and again.”

“Charming, playful, and humorous, this coming of age story will delight viewers at any stage of their life cycle.”

“So we started to write something, but then we were hypnotized by the GIF Graphic Interchange Format and we decided to just watch it again.”

“With a restrictive points of view, we experience a range of emotion without a smile. This film put an upside-down frown on our faces.”

Best US Film
Sparky by xinbaonuzi