Toho Unveils Teaser for Makoto Shinkai’s ‘Weathering With You’

The follow-up to the acclaimed Japanese director’s 2016 anime feature ‘Your Name’ arrives in theaters in Japan on July 19. 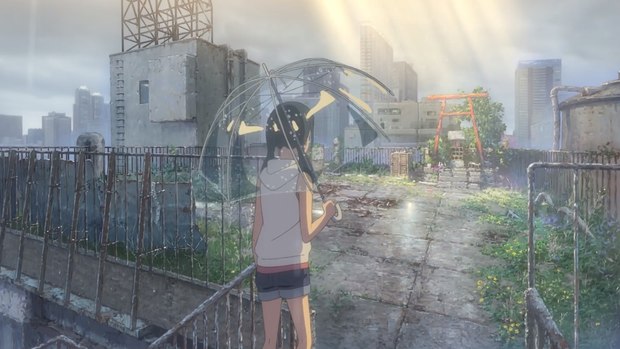 Makoto Shinkai’s ‘Weathering With You’ arrives in theaters in Japan on July 19. Image courtesy of Toho.

Toho has released the first teaser trailer for Makoto Shinkai’s Weathering With You, the follow-up to the Japanese director’s 2016 animated feature, Your Name.

Weathering With You follows a high school student named Hodaka, who moves from a small island to Tokyo and finds himself working for a shady occult magazine to make ends meet. While working there he meets a young woman named Hina who seems to have the power to control the weather. The film is produced by Story Inc., animated by CoMix Wave Films, and distributed by Toho. Your Name character designer Masayoshi Tanaka returned to work on the new film, joined by animation director Atsushi Tamura and art director Hiroshi Takiguchi.

Watch the teaser and read the official synopsis below:

When small town high schooler Hodaka Morishima (Kotaro Daigo) makes a go at living on his own in Tokyo for the first time, it isn’t long before he finds steady work writing for a local magazine focused on all things strange and supernatural -- but the most interesting thing happening in the boy’s life is the unusual weather. Rain’s common enough in the city that at first, no one makes much of the recent torrential showers that never seem to end, but unbeknownst to nearly everyone, a young girl named Hina Amano (Nana Mori) who has the ability to control the weather walks among them.

Your Name earned upwards of $357.9 million globally following its release in 2016, making it the biggest Japanese film in history. That includes a domestic tally of $235 million, which pushed the anime feature to rank as the second-highest grossing domestic film ever in its home market -- behind only Hayao Miyazaki’s Spirited Away.

While a global release date or English-language dub version is yet to be announced, Weathering With You arrives in theaters in Japan on July 19.