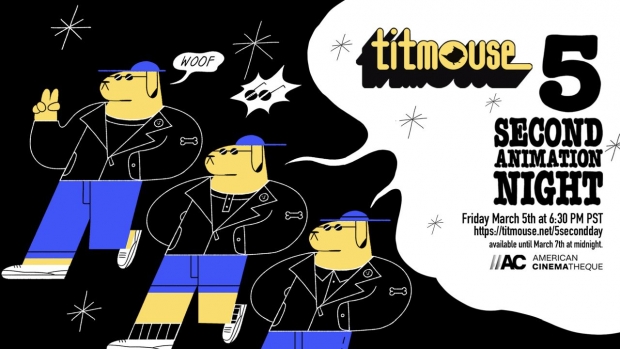 If you’ve never watched one of Titmouse’s annual 5 Second Day shorts screenings, you are in for a treat! The Emmy Award-winning animation production company has announced it has partnered with The Egyptian to stream this year’s 5 Second Day shorts compilation, 5 Second Animation Night, beginning March 5th at 6:30 p.m. PST at https://titmouse.net/5secondday. The program will stay online through midnight on March 7th. Watch from the comfort of your own home / pandemic bunker!

The 5 Second Day screenings feature well over 100 original shorts created by Titmouse artists from its LA, New York and Vancouver studios. Each year, one day is set aside where everyone at the company can produce a 5 second animated short. The studio closes so staff can make whatever project is swimming around in their heads.  No holds barred. The shorts are not rated by the MPAA; the screening is intended for an adult audience.

The tradition has evolved since it started in 2008. Since then, the complexity, length, and creative collaboration across departments has skyrocketed. Some artists will work on ambitious ideas for months. In the end, the artists retain control of the short. To date more than 1,000 5 Second Day cartoons have been created; the annual event is deeply woven into the culture of the company.

Last year, when the studio had to cancel its Vancouver screening, they screened the program online for the first time (on Twitch). “We always want to make sure the artists’ films are seen by an audience!” Titmouse president and founder, Chris Prynoski, explained at the time. “When the challenges of this pandemic made it clear that our Vancouver screening was not going to be an option, I decided to beam it directly into the viewers' brains! I was told that technology does not yet exist, so we are streaming it on Twitch!”