Fast paced, virtual reality experience inspired by Titmouse’s annual event allows players to step inside a metal cage and destroy everything in sight. 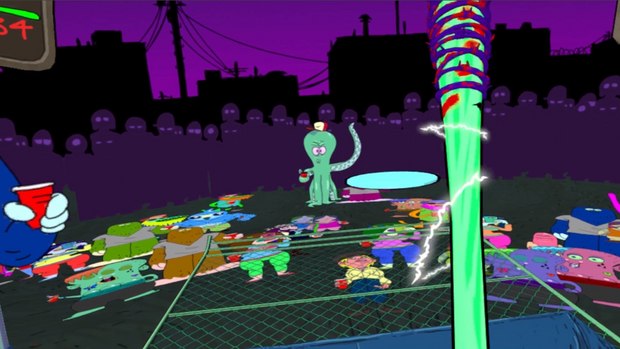 Inspired by the annual Smash Party where people line up to smash real objects while inside of a cage, Smash Party is a free interactive VR experience, developed by Viacom NEXT for HTC Vive available on Steam.

Step around inside a metal cage, wield a barbed-wire baseball bat and decimate everything in sight. Featuring items with the signature Titmouse art style created by Chris Prynoski, Titmouse president and founder (Nerdland, Metalocalypse, Venture Bros.), players will destroy brightly colored vases, TVs, plates and toilet bowls in front of a cheering crowd. The more property damage inflicted in 60 seconds, the higher up the leaderboard players will climb. Things get really crazy when the walls come down and an enraged octopus hurls smash-worthy objects in rapid-fire succession.

“Now that the carnage from the 10th annual Smash Party is long gone, digital destruction lives on in Smash Party VR,” said Chris Prynoski, Titmouse president and founder. “It was great working with the folks at Viacom NEXT to create the perfect VR party game. Inside of the cage, it’s all about the smashing. Outside of the cage, you got a bunch of cartoon buddies who cheer you on during your destructive rampage. A bigfoot. Check. A ‘roid raged bipedal titmouse.’ Check. My old college roommate, Goat. Check. Who wouldn’t want this enthusiastic animated support group to throw gasoline on the fire of your annihilation.”

“As the first of many immersive VR experiences to come out of Viacom NEXT, we loved working with Titmouse to bring to life the ultimate Smash Party experience,” said Chaki Ng, SVP Viacom NEXT. “If HTC Vive owners have a big appetite for destruction, the smashing potential may continue to expand. Chris’ creative VR drawings are candy to work with and our engineering mayhem quotient has yet to be quenched, so stay tuned for further Smash Party updates.”