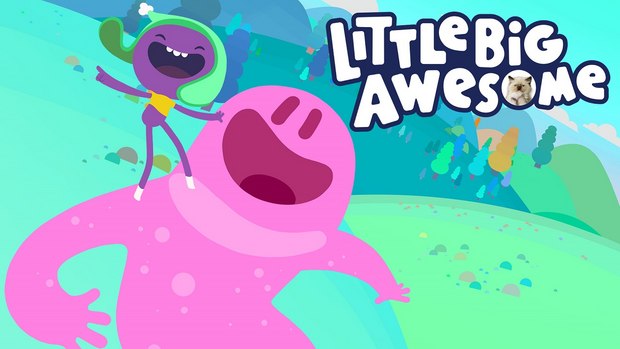 “Little Big Awesome is about friendship in a world where bubbles can talk and cactuses can sing,” said writer Ben Gruber (Spongebob Squarepants and Superjail!). “This show has cartoons, puppets, original music, and naughty real life kittens. What else do you need to know?”

Metalocalypse creator, Brendon Small, composed a bizarre, quirky song for the pilot that is totally on par with the show’s eccentric tone.

Debuting on June 17th on Amazon, Little Big Awesome is part of a larger content drop for Prime Members which includes a slate of additional children’s programs and two hour-long dramas. The content will be available for Prime Members throughout mid-June and July. Amazon’s pilot season is a unique development process that gives all customers an opportunity to stream and review pilots in order to help choose the next Amazon Original Series that are then available to Prime Members.

Here is the official synopsis of Little Big Awesome (for children ages 6-11; animated):

Little Big Awesome is a comedy for kids 6-11 that combines 2D animation, puppetry, and real live action footage as we explore the whimsically weird world of Ballopolis. Our show follows Gluko, a jelly giant, and Lennon, a small kid-like creature with a fuzzy hat, who are inseparable buddies. They adventure through a universe where sea turtles fly, flowers talk, and tear drops splash around on a hot summer day. Gluko and Lennon’s desire to help those around them can, at times, lead them to epically outlandish places, but at the end of the day, this show is about two best buds making their own fun and enjoying the wonderfully strange world around them. Created by Tomi Dieguez (TRONCO), written by Ben Gruber (Spongebob Squarepants and Superjail!), and produced and animated by Titmouse (Randy Cunningham and Metalocalypse).