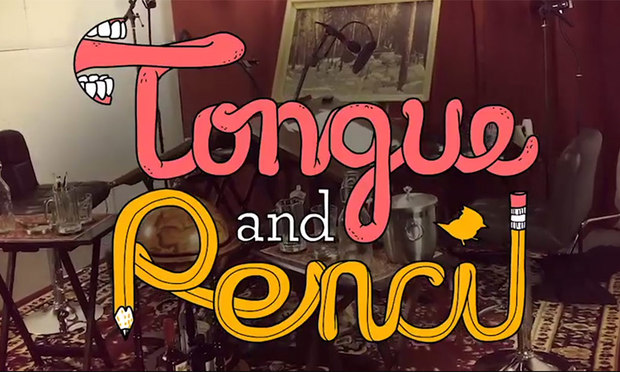 LOS ANGELES -- Following the reveal made at the LA Animation Festival this past weekend, Emmy Award-winning animation production company Titmouse announced the availability of the first three one-hour episodes from the new talk show, Tongue and Pencil, viewable exclusively on the YouTube channel of the same name. Filmed over the course of three years, Titmouse founder and owner Chris Prynoski invited artist friends into the studio to pick up a pencil, raise a glass, and talk about drawing and stuff that happened to them.

“With the Tongue and Pencil, we’ve finally elevated the art of drawing poop doodles and bullshitting with cartoonists in a brand new medium -- the Internet,” said Prynoski. “People who like animation, comics and illustration that are willing look past the fact that we broke the 180-degree rule and recorded the conversations with sub-par audio should totally check out our new interview series. Each week, you’ll see original, never before released drawings from real artists, learn random facts and hear inside jokes about people you probably don’t know. Your eyes will bleed and your heart will explode with joy.”

Each Tongue and Pencil session results in two pieces of original collaborative art. Titmouse will auction off the artwork created during the series to raise funds for “The Titmouse Tongue and Pencil Grant for Young Artists Who Like To Draw Stuff,” a grant for emerging talent in animation, comics and fine art. Interested artists should email TongueAndPencil@titmouse.net for more information on how to apply.