Titmouse Animators Nail What Video Meetings are ‘Really’ Like

A team of artists from the Emmy Award-winning animation studio recently produced a hilarious new short, ‘The Mystery of Meetings,’ that dives deep into what’s really going on behind the screens of video meetings. 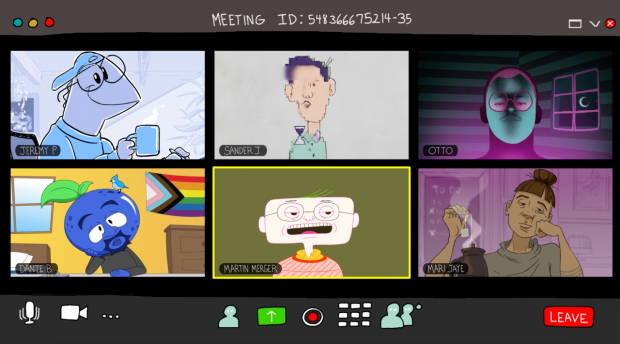 A team of artists from Emmy Award-winning animation studio Titmouse recently shared their take on what’s really going on behind the screens of video meetings; their hilarious new 2D short film, The Mystery of Meetings, travels deep inside the minds of meeting participants for a quirky yet critical look at mysterious worlds beyond the webcam.

“This project gave us the opportunity to really explore what it's been like to spend the last two years of our lives on video calls,” says Titmouse animation director Matt Taylor, known for his work directing on Rick and Morty: Exquisite Corpse and Fairfax.

The cutaways within the short gave each animator 15 seconds to create their own narrative and interpret “what happens behind the screens” in their own way. The team used software platform Bluescape to collaborate while working remotely from California, Oregon, Texas, New York, and Estonia. Employing a range of stylized 2D animation styles, the team used Bluescape to review segment ideas, designs, boards, and timing, sharing notes and suggestions during the course of production, which all told, took 12 weeks from start to finish.

“At the start of the project, I drew these simple, goofy little humans on a video call,” Matt explains. “That progressed into each member of the team animating one of the meeting participants based on an avatar they created. Then one-by-one we break from the video call and see what’s going on in each of the participant's minds.”

Matt, describing how this project was different from others he’s worked on, notes, “Most times, we’re in divide-and-conquer mode. It’s like, ‘I’ll do this, you do that,’ and we don’t think much about it. On this project, we tried collaborating differently. It was cool to be in a shared space (virtually) where we could all contribute to an idea and not be on our own islands so much.” Want to hear more from Matt and the team?

Don’t miss a roundtable discussion with the Titmouse production team on July 12th to learn what inspired each artist's segment and peek into the creative process behind the short. Save your spot here.