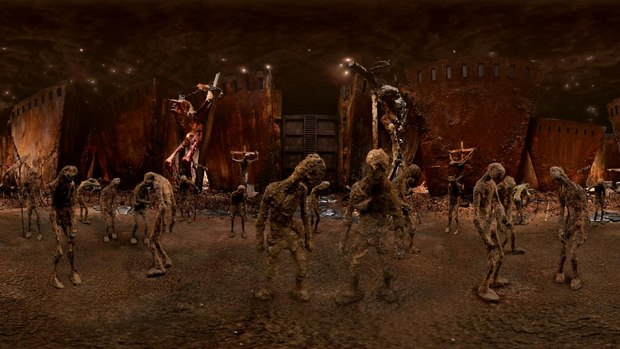 The idea of introducing Tippett’s unique vision into a 360° immersive setting was spearheaded by Mike Breymann of Kaleidoscope VR, a fan of both Tippett and the original short film version of Mad God. “I really liked the concept of bringing an art form that has been around for a hundred years and matching it up with this new accelerated world that we’re in,” he writes on the Wevr production blog. “It allows for discussions around ways of experiencing art and virtual reality. There’s this notion that game engines, rapid advancements in hardware, accelerated graphics and all this technology is somehow carrying us forward artistically, and this experience is in some ways calling all that into question.”

When approached about adapting Mad God into VR, Tippett didn’t hesitate. “I started trying to figure out how we can do this,” the legendary special effects artist commented. “The whole thing was shot stop-motion on tiny sets, so it has a very visceral photographic handmade look as opposed to the cleanliness of so much of the VR content that’s being produced with computers. What really excited me about the whole VR experience was how different it is than cinema. I see VR as something completely different in the way that literature and cinema have, over the years, really honed narrative storytelling to an art specific to the form. And the minute you alter the format and approach, it changes everything.” One of the more significant conversations surrounding narrative storytelling in VR has been about how to direct the audience’s attention. With more freedom and an expanded point of view comes a potential for lack of direction. The preexisting language of cinema -- editing, insert shots, etc. -- doesn’t apply in the 360° environment. It’s a question Tippett found intriguing from the very beginning. “There are a number of things when you are articulating a narrative in film to advance the narrative, and editing is a huge aspect of that,” he said. “You can do that in VR but it can be kind unsettling to do cuts. And when I became aware of what the possibilities were for binaural sound, that opened up a huge door in that it could function in a way like editing.”

“We knew from the very beginning that for the ‘story’ to work it was important to have binaural audio,” Breymann added. “Phil made it clear early on that he wanted the sound to draw the viewer’s gaze. And we knew we couldn’t do that using just stereo capture. So we had to be in a game engine to specialize that audio so that the entire effect of what we were trying to achieve would be successful.” To shoot their stop-motion story in VR, Tippett and company repurposed the sets and miniatures from the film version and constructed a 360° set. “We replaced the sky and the ground digitally,” Tippett detailed. “And then we had twenty something of these characters we call the ‘shit men.’ They’re small six-inch stop-motion characters that are made out of foam rubber with articulated skeletons and they are covered, I took cat hair from my vacuum cleaner at home and put that on their surface so every time an animator touched them it would disturb the cat hair. So the contour of the characters crawling all the time creates the kind of otherworldly distance.”

The end result is refreshingly gritty and surreal and nothing short of spectacular. An immersive descent into a world that is darkly dreamlike and strangely relevant. A refreshing burst of aesthetic exploration that is entertaining and unquestionably art. As Tippett explained, “I would characterize it as a feeling rather than a specific intent. The world of Mad God is a somewhat dystopia alternate reality where everybody loses. I have been characterized as being slightly misanthropic in my world view. So that is pretty much the guiding concept for this thing.”