Oscar-nominated animated short follows a husband and wife who have grown apart: he lives on the floor, she lives on the ceiling, and their marriage hangs in the balance. 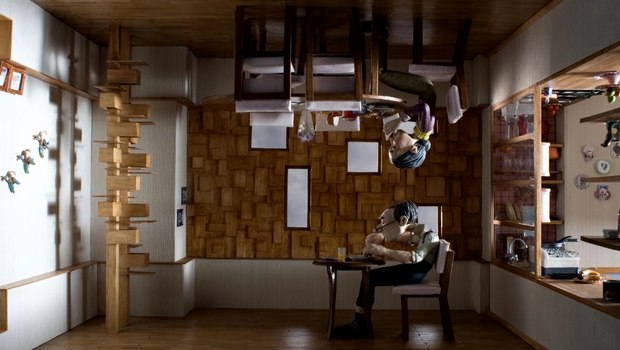 Three years after its premiere at the 2012 Cannes Film Festival, Oscar-nominated short film Head Over Heels is online for the public. Directed by Timothy Reckart, who was named this year as one of “10 Animators to Watch” by Variety, the film tells the story about a husband and wife who have grown apart over the years. He lives on the floor, she lives on the ceiling, and their marriage hangs in the balance.

Produced at the U.K.'s National Film & Television School, the stop motion short went on to win over 30 awards at festivals around the world, finally garnering an Annie Award, an Oscar nomination, and the Cartoon d'Or for Best European Short in 2013.

In a nod to the rise of streaming -- and the death of the DVD experience -- the film website also includes special features such as a director's commentary track, a featurette about the soundtrack, and a version of the film flipped upside-down.

“It's been two years since Head Over Heels was nominated for an Oscar, and three years since we finished it, and we still haven't had it online for longer than a week or so,” Reckart says about the release. “I've been meaning to put it online publicly for a while now, but it's been so long that I felt like we have to offer something more to justify the long wait. So I've been putting together a package of special features that we'll host on the website along with the full film.

“Basically, this is my Luddite response to the rise of streaming and the death of DVDs,” Reckart continues. “On the one hand, the death of DVD is great, because the physical production of DVDs has been a barrier to entry for short filmmakers like me. Now that people prefer to stream films, it's free for Head Over Heels to join that market just by uploading to the internet. On the other hand, what happened to special features? As a teenager, I devoured my DVD special features and it was one of the major ways I got a film education. But I don't know of a single streaming service that offers commentary tracks, making of featurettes, etc. And to me, that's a loss. So this Head Over Heels website is sort of my compromise between DVD and streaming -- it's all online, but we're still offering a pool of special features for people who really like the film. It's an online DVD.”