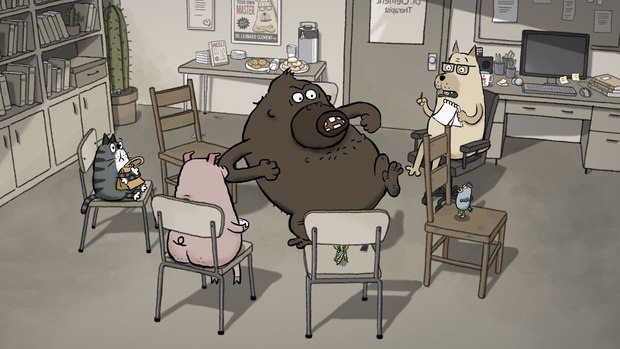 Two new animated shorts produced by the National Film Board of Canada have been selected to screen at the upcoming 2018 Toronto International Film Festival, as well as Astra Taylor’s latest feature documentary, What is Democracy?, which will make its North American premiere.

The 14-minute Animal Behaviour is from the prolific team of Alison Snowden and David Fine, who won an Oscar in 1995 for their animated short, Bob’s Birthday. The 10-minute The Subject is the latest stop-motion gem from Quebec’s Patrick Bouchard.

Animal Behaviour, which just won the Grand Prix at Rio de Janeiro’s Anima Mundi, is about five animals - including a leech who suffers from separation anxiety and a bird with guilt issues – who meet regularly to discuss their inner angst in a group therapy session led by Dr. Clement, a canine psychotherapist. This funny yet emotional short deals with animal issues that are not unlike our own. Should we learn and adapt, or should others just accept our true nature? The Subject is about the act of creating and delving into the deepest part of one’s self. Artists engage in a process of introspection from which they never emerge unscathed -- digging and searching within themselves, seeking the source of their fears and, in so doing, yearning to find liberation.

In Bouchard’s film, which will make its Ontario premiere at TIFF, the stop-motion master dares to place himself on center stage, confronting his alter ego in the form of a life-size cast of his own body -- beginning a physical confrontation between human and clay puppet. Pierced, slashed, chiseled, the body yields its secrets, revealing itself to be an intricate mechanism as it disgorges various objects: a microscope affording views of coursing vital fluids, or a fantastical merry-go-round evoking pleasure and ecstasy -- but also fear.

Selected for the 50th Directors’ Fortnight at Cannes, The Subject is the fifth NFB film by Bouchard, who’s a three-time winner of Quebec’s Prix Iris, for The Brainwashers (2003), Dehors novembre (2005) and Bydlo (2013). The Subject is produced and executive produced by Julie Roy for the NFB’s French Animation Studio in Montreal.

Coming at a moment of profound political and social crisis, Taylor’s latest NFB feature documentary, What Is Democracy?, makes its North American premiere at TIFF. Taylor is a filmmaker, writer, and political organizer whose credits include the NFB documentary Examined Life (TIFF 2008) and Zizek! (TIFF 2005). What Is Democracy? is produced by Lea Marin and executive produced by Anita Lee for the NFB’s Ontario Studio in Toronto.