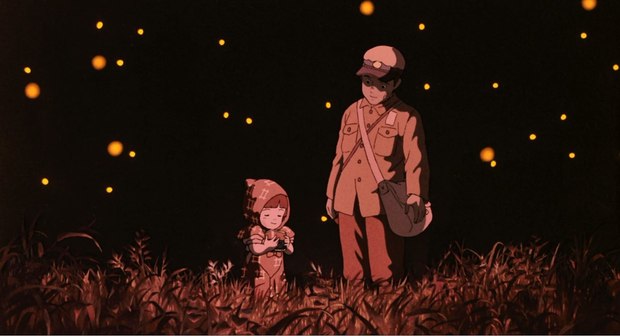 Throughout 2018, GKIDS and Fathom Events continue their collaboration to bring a new line-up of treasured animated features to U.S. cinemas. STUDIO GHIBLI FEST 2018 gives fans an opportunity to see nine of Studio Ghibli’s celebrated animated masterpieces on cinema screens nationwide, along with some very special surprises.

Up next from STUDIO GHIBLI FEST 2018, celebrating its 20th Anniversary, is Grave of The Fireflies. Directed by Academy Award-nominated Isao Takahata, the film has been universally hailed as an artistic and emotional tour de force. To help kick things off, AWN has two sets of tickets to give away to two lucky winners!

As the Empire of the Sun crumbles upon itself and a rain of firebombs falls upon Japan, the final death march of a nation is echoed in millions of smaller tragedies. This is the story of Seita and his younger sister Setsuko, two children forced to fend for themselves in the aftermath of fires that swept entire cities from the face of the earth. Their struggle is a tribute to the human spirit. Presented in its digitally remastered and restored format, Grave of The Fireflies is one of the rare films that truly deserves to be called a masterpiece.

Tickets for Grave Of The Fireflies can be purchased online by visiting gkidstickets.com and at participating theater box offices. Moviegoers throughout the U.S. will be able to enjoy these events in over 700 select movie theaters.

To enter your chance to win a pair of free tickets to see Grave Of The Fireflies in a theater near you, email info@awn.com with the subject heading “Grave Of The Fireflies Ticket Giveaway” with your full name, preferred date & showtime, and theater location. Dates and showtimes for participating theaters can be found here. Two lucky winners (sorry folks, U.S. residents only) will be chosen at random, and will be notified via email. The deadline for entries is 5:00PM PDT on Monday, August 6.