Consumer products for ITV Studios Global Entertainment’s new CG-animated series are poised to launch in France, the Nordics and Benelux. 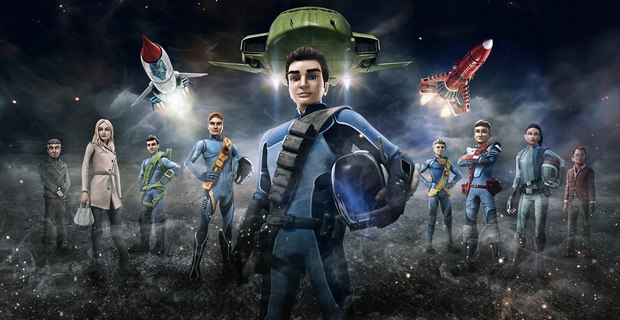 LONDON -- ITV Studios Global Entertainment’s series Thunderbirds Are Go has been captivating fans across Europe with its action packed storylines and top class production. The new show is drawing strong ratings across France, Benelux and Nordics and to meet the growing consumer demand, ITVS GE will be launching merchandise programmes in these three markets from September.

Spearheading the merchandise roll-out in France, Benelux and the Nordics is the toy category and ITVS GE is working closely with master toy licensee Vivid Imaginations to launch its innovative range in each market from September. The first toys launching will be flagship lines including the iconic Tracy Island interactive playset, Supersize Thunderbird 2 playset and Tracy brothers action figures. Vivid’s roll-out will be supported by comprehensive marketing including TV advertising, digital and PR campaigns in addition to retail promotions and eye-catching points-of-sale.

To drive excitement in France, Vivid’s toy line will have special launch with Toys R Us that will include dedicated end cap in all stores, back-to-school catalogue offers, website banners and a gift-with-purchase promotion will follow later in the year for the Christmas period. While La Grande Récré will ensure high-visibility for the range with end caps in 200 stores and will run an exclusive gift-with-purchase offer during October and November. The toy retailer will also host Thunderbirds Are Go content on its website and execute a parenting blogger outreach initiative.

Alongside Vivid’s toy line, ITVS GE is working with licensing agents in France, Benelux and the Nordics to grow local consumer products programmes. In France, Thunderbirds Are Go debuted in April on Gulli and now ITVS GE is collaborating with its appointed licensing agent Nelvana to develop a full line-up of merchandise. Hachette Livre has been appointed the master publisher and will be launching its first Thunderbirds Are Go storybook as part of their prestigious ‘Biblioteque Verte’ collection in autumn 2016. Kid’Abord has been signed for a collection of back-to-school, stationery and bags for launch in 2017.

In the Benelux territories, Thunderbirds Are Go now airs in the Netherlands on Zapp and in Belgium on Ketnet. In addition to Vivid’s toy line, Spin Master will debut its popular Air Hoggs collection in Benelux from September that will be supported by a TV advertising campaign. Joining these toy licensees, License Connection represents the brand in the region and has signed Meis & Maas as master publishing partner who will launch a range of books and magazine formats in 2017. Building the accessories category, Jacob is on board for a range of boys’ bags inspired by the show and home entertainment partner Just Entertainment’s second edition DVD will also hit shelves next month.

Over in the Nordics, this year has seen the first series of Thunderbirds Are Go debut in Norway on NRK Super, in Sweden on Barnkanalen (SVT), in Finland on Juniori and in Denmark on Ramasjang and Ultra.  Vivid’s toy line will be distributed by TOPTOY from late summer 2016 through their pan-Nordic retail chain BR Toys and Toys R Us. To support the toy range, ITVS GE is currently working with its appointed licensing agent Alicom to sign local partners across publishing, apparel, accessories and homewares.

“We’re delighted to see Thunderbirds Are Go attracting a loyal fan-base across Europe and generating a great deal of interest from local partners and retailers, too,” comments Trudi Hayward, SVP Head of Global Merchandise at ITVS GE. “There’s much more to come from the brand and these latest developments underline its potential to become one of the most popular boys’ properties in Europe.”

Thunderbirds Are Go has enticed broadcasts and licensees across the world and ITVS GE has now sold the show into over 40 markets across Europe, Japan, the United States, Canada, Brazil, Australia, New Zealand and the Middle East and signed over 80 licensees internationally. Season two is set to hit screens from later in 2016 with a third season slated for release in 2017.