Diane Obomsawin’s I Like Girls, Chintis Lundgren’s Manivald and Eva Cvijanović’s Hedgehog’s Home to be featured in the shorts program. 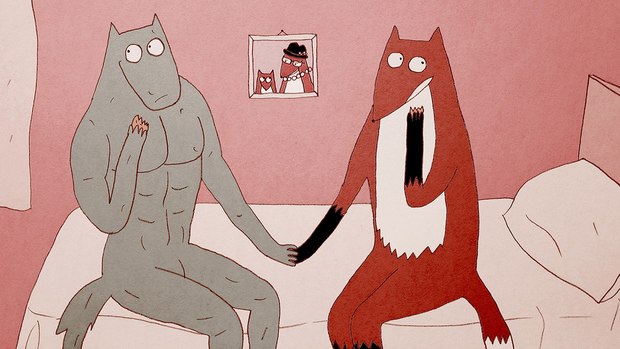 Chintis Lundgren’s Manivald is about an overeducated, unemployed and uninspired fox living with his mother when a sexy washing machine repair wolf enters their lives.

It’s the latest honor for these films, which share a staggering 40 awards to date. The choice of these three films from the NFB is also a testament to the world-class reputation of its legendary animation studios, as well as to the NFB’s commitment to producing groundbreaking works by women. Eva Cvijanović’s Hedgehog’s Home is a stop-motion fable about finding a place of safety, dignity and comfort.

Hedgehog’s Home: Winner of more than 25 international awards and honors, including an Annie Award nomination for Best Animated Short Subject, the Young Audiences Public Prize at the Annecy International Animated Film Festival and the Short Film Audience Award at Animafest Zagreb, Eva Cvijanović’s Hedgehog’s Home is a sumptuous and delicately choreographed stop-motion fable reviving the timeless and timely notion of cultivating our own place of safety, dignity and comfort, no matter how big or small. Narrated by Kenneth Welsh (Twin Peaks), this international co-production is produced by Jelena Popović (NFB) and Vanja Andrijević (Bonobostudio, Croatia), with Michael Fukushima as executive producer. I Like Girls: Montreal cartoonist and animator Diane Obomsawin, a.k.a. Obom, adapts her latest graphic novel for the screen, using endearing anthropomorphic figures to tell real-life stories of first love in I Like Girls. Winner of seven awards to date, including the Nelvana Grand Prize for Independent Short Animation at the Ottawa International Animation Festival and Best LGBT Short at the New York City Short Film Festival, this eight-minute film was produced by Marc Bertrand, with Julie Roy as executive producer for the NFB’s French Animation Studio.

Manivald: Manivald the fox has just turned 33. Overeducated, unemployed and uninspired, living with his mother, he has an easy life but not a good one. But all this starts to change when the washing machine breaks down and Toomas, a sexy wolf repairman, arrives to fix it -- and them. Narrated by comedian and writer Trevor Boris and featuring the voice of singer and actress France Castel, Chintis Lundgren’s Manivald has garnered nine awards, including the Program A Audience Choice Award at the New York City Short Film Festival and the Award for Best Script at the Ottawa International Animation Festival. It is produced by Lundgren (Chintis Lundgreni Animatsioonistuudio, Estonia), Draško Ivezić (Adriatic Animation, Croatia) and Jelena Popović (NFB), with Michael Fukushima as executive producer.