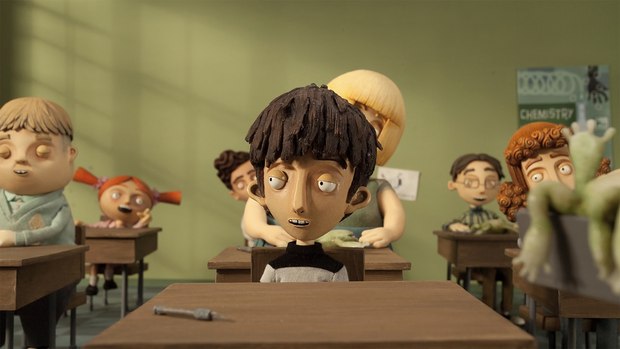 Two-time Academy Award nominee Cordell Barker (The Cat Came Back, 1988; Strange Invaders, 2001) will be back in Los Angeles this fall as his latest National Film Board of Canada (NFB) animated short If I Was God makes its North American premiere at the 2015 Los Angeles International Short Film Festival, as part of a stellar selection that also includes award winners The Weatherman and the Shadowboxer by Randall Lloyd Okita and In Deep Waters (NFB/Papy 3D) by Sarah Van Den Boom. LA Shorts Fest takes place September 3-10.

What would you do if you were 12 and suddenly found yourself charged with God-like powers? Would you use them for good? For bad? Perhaps a little of both? For one Grade 7 boy whose mind starts to wander while dissecting a frog in Biology class, the possibilities seem endless.

If I Was God explores the difficult gateway between childhood and adolescence, when the approaching power of adulthood is often mistaken for omnipotence. Drawing inspiration from Barker’s own memories of a particularly awkward day in Grade 7, and using a variety of animation techniques, from traditional animation to stop-motion puppets and more, he creates a darkly whimsical 3D animated short film with an organic, hand-made feel that’s as imperfectly human as the world we all ultimately craft for ourselves. The film is produced by Michael Fukushima and David Christensen for the NFB.

The Weatherman and the Shadowboxer (9 min)

The Weatherman and the Shadowboxer is a visually haunting animated short film about two brothers who share the scars, though not the memories, of an untold history that has driven them to existential extremes. Combining high-speed camerawork, striking art direction and intricate animation sequences, acclaimed visual artist and filmmaker Randall Lloyd Okita crafts a poetic elegy to connectedness and survival.

Okita’s first foray into full-on animation filmmaking has received the Best Experimental film award at the NY Shorts Fest, the Best Canadian Short Film Award at the Toronto International Film Festival, and the award for best short film at Montreal’s Festival du nouveau cinéma. It is produced for the NFB by Maral Mohammadian and Michael Fukushima.

From the moment they are conceived, twin babies forge a close bond in their mother’s womb. But when one twin dies during the pregnancy, the surviving twin is left with a feeling of grief that may last a lifetime. This moving and poetic animated short by Sarah Van Den Boom tells the stories of three people who are deeply affected by the death of their twin in utero, a phenomenon that is rarely discussed yet not uncommon.