Disney releases new HD masters of three of the most beloved films directed by the legendary Hayao Miyazaki on Blu-Ray and special edition DVD. 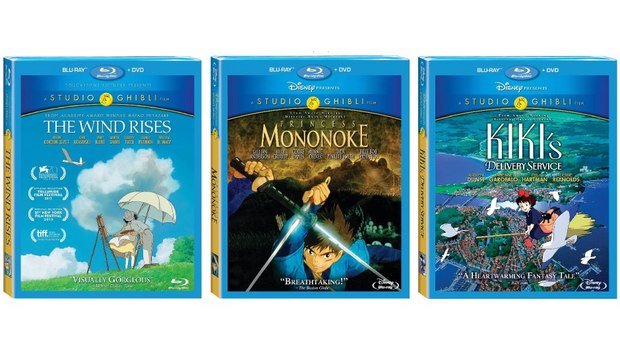 Three of the most beloved films directed by the legendary Hayao Miyazaki are now available in the U.S. on Blu-Ray and special edition DVD.

Kiki’s Delivery Service (Disney, $36.99 Blu-ray and DVD, $29.99 DVD) is a fantastic coming-of-age story that revolves around a young witch, Kiki (voiced by Kirsten Dunst), who moves to a new town and uses her flying ability to earn a living. In addition to interviews with Miyazaki and producer Toshio Suzuki, and other bonus materials, the 2-Disc Special Edition includes a musical montage of “Ursula’s Painting,” a painting created by junior high school students and used by Miyazaki for the film.

The environmental-themed Princess Mononoke (Disney, $36.99 Blu-ray and DVD, $29.99 DVD) is set in Japan during the late Muromachi period (approximately 1337 to 1573). Inflicted with a deadly curse, a young warrior named Ashitaka sets out to the forests of the west in search of the cure that will save his life. Once there, he becomes inextricably entangled in a bitter battle that matches Lady Eboshi and a proud clan of humans against the forest’s animal gods, led by the brave Princess Mononoke, a young woman raised by wolves. This monumental struggle between man and nature blends stunning artistry with epic storytelling. The Blue-Ray release includes the original Japanese storyboards and original Japanese and English-language trailers, as well as the original English theatrical trailer and original TV spots.

The Wind Rises (Disney, $36.99 Blu-ray and DVD, $29.99 DVD) is a fictionalized biopic of Jiro Horikoshi, designer of the Mitsubishi A5M and its successor, the Mitsubishi A6M Zero, used by the Empire of Japan during World War II. The film is adapted from Miyazaki's manga of the same name, which was in turn loosely based on the 1937 short story The Wind Has Risen by Tatsuo Hori. It was the final film directed by Miyazaki before his retirement from full-length animated films in September 2013.