To mark the iconic milestone since the first book in 1945, ‘Thomas & Friends’ celebrates its 70th anniversary at the British Museum in London. 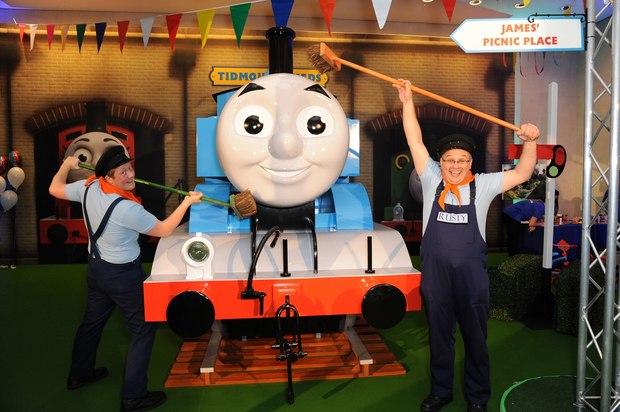 “The Railway Series” began as a collection of stories featuring Thomas the Tank Engine created by the Reverend W. Awdry to entertain his son Christopher when he was sick with measles.

Stories of Thomas and his friends, first published in 1945, have continued to evolve ever since, entertaining and teaching key life lessons to children across the world on issues such as friendship, bravery, problem solving and teamwork.

Marking a year of celebration and an extraordinary 70 years of the brand, Thomas and his friends will be celebrating this historic milestone with a VIP party at the British Museum, with a host of special guests, including the Awdry family.

Kate Schlomann, VP Global Brand at HIT Entertainment said, “2015 is shaping up to be one of the most exciting years ever for Thomas & Friends.  We have developed a strong programme of retail, marketing and PR activity with our partners that celebrate Thomas’ 70 years of pre-school heritage as well as communicating the timeless values of this much loved property.”

Watched in over 300 territories, Thomas’ 400+ episodes and seven movies based around the Island of Sodor have been translated into more than 40 languages.

This year also marks the biggest content pipeline to date - as well as the launch of series 19, it sees the release of mini-tentpole ‘Dinos & Discoveries’ and tentpole movie ‘Sodor’s Legend of the Lost Treasure’.  For the first time ever, additional content is being produced – both long form and short form content – including a 44’ special Thomas & Friends: The Adventure Begins, which follows the original adventures of Thomas.

From the pages of a storybook to its live action UK TV debut in 1984, the content has inspired and excited generation after generation of youngsters proving that when your best friend is a train you really can go anywhere.

The first 23 years of production featured real toy trains before moving to a hybrid with CGI animated Engine faces.  It wasn’t until 2012 that Thomas went fully CGI.

Christopher Keenan, VP Global Content and Executive Producer at HIT Entertainment said, “Thomas shows no signs of running out of steam as he celebrates this milestone year entertaining and engaging children.  Thomas has made many friends and been on countless adventures over the years - he is just as relevant to the children today as he was back in 1945.”