‘Snow White and the Seven Dwarfs’ inspired episode to debut at Disney's D23 Expo on August 14. 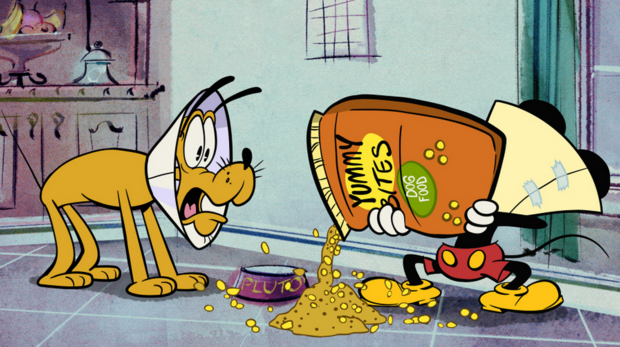 Season three of Mickey Mouse, the multiple Emmy and Annie Award-winning comedy cartoon spotlighting Disney's #1 star, debuts Friday, July 17 (8:25 p.m., ET/PT) on Disney Channel, and will be available on WATCH Disney Channel, Disney.com and iTunes the day after the linear premiere. A special Snow White and the Seven Dwarfs-inspired episode titled “Wish Upon A Coin” will make its global debut at D23 Expo, Disney's ultimate fan event, on August 14 in Anaheim, CA. A worldwide hit since its premiere in June 2013, the shorts have reached nearly 124 million unduplicated viewers worldwide, airing in 163 countries and in 34 different languages.

Season three of the comedic shorts features Mickey and pals -- Minnie Mouse, Donald Duck, Daisy Duck, Goofy and Pluto -- facing prickly predicaments and sentimental moments in locales around the globe including England, Mexico, Turkey, Egypt and Hawaii, as well as adventures at home.

In the season opener, “Coned,” Mickey and Pluto's day becomes a series of mishaps when Mickey, sympathizing with his injured pup Pluto, decides to 'cone' himself. Other new episodes include “One Man Band,” which takes Mickey on an adventure through London in pursuit of a suitable spot for his one-man band to perform, Friday, August 14 (9:25 p.m., ET/PT) and “Wish Upon A Coin,” which makes its television debut Friday, August 21 (9:25 p.m., ET/PT).

With the slapstick feel of classic Mickey Mouse and contemporary direction and pacing, the Mickey Mouse cartoon shorts have resonated with audiences around the world and now have extensions across other Disney businesses. Designs from the series are featured in Disney California Adventure's “World of Color -- Celebrate!,” which debuted as part of Disneyland's Diamond Celebration. In March, Disney's popular Vinylmation collectibles launched a series of eight characters from the shorts and designs from the series are currently being showcased in promotion of Disney's D23 Expo.

Disney Channel is a 24-hour kid-driven, family-inclusive television network that taps into the world of kids and families through original series and movies. Currently available on basic cable in over 96 million U.S. homes and to millions of other viewers on Disney Channels around the world, Disney Channel is part of the Disney ABC Television Group.