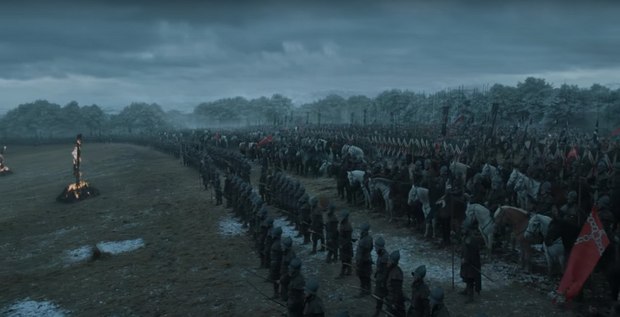 Through previs, the show’s many visual effects and establishing shots can be visualized in advance and mapped out as detailed shooting schematics. In addition to creating all of the previs and “techvis” for the series since Season 4, The Third Floor’s team supports on-set filming using a variety of on-set visualization and virtual production techniques.

The Third Floor won Emmy Awards in 2015 and 2014 for its contributions to the visual effects of Game of Thrones in previous seasons.

“Season 6 is special because of its sheer ambitiousness,” said Blok. “From huge action-packed battles in the North to the fiery retaliation of Daenerys and her dragons, it was amazing to work with an incredibly supportive and collaborative team -- from the directors and directors of photography to Joe Bauer, Steve Kullback and the entire visual effects crew. This includes all the extremely dedicated and talented previs artists from The Third Floor, whose skill and creativity helped realize some of the most memorable moments. To be given the opportunity to contribute to such an outstanding show that continually pushes the boundaries is the real accolade.”

“It’s an absolute honor to work on the show,” said Carney, “to interface each day with one amazing department after another and be entrusted with helping map out creative ideas and shooting approaches for some of the most ambitious scenes to date in series television.” The Slaver’s Bay Attack involved all three dragons, the fictional city of Meereen and shooting locations from Spain to Belfast. The Third Floor modeled the environment in previs, ensuring the various geographic locations could be tied together with the CG world and that the animated CG dragons would be able to swoop and land, interacting in real-life locations. Shots of Dany riding Drogon were done in a separate greenscreen shoot with moves established in previs used to program the physical motion base.

Shots of the dragons attacking the ships were previsualized with Joe Bauer and techvis helped determine requirements for the camera cranes and greenscreens used on the Banbridge exterior set. Wide shots of Meereen were visualized by incorporating real location elements such as the castle walls from the Muralla at San Cristobal in Spain. These architectural elements were shot using drones and utilized techvis data for flight paths and speeds as well as lens information.

The Third Floor collaborated with virtually every department to support the production shoot for the Battle of the Bastards sequences set near Winterfell. Working from storyboards and with director Miguel Sapochnik, artists visualized layouts for the battlefield, including huge armies that were created using groups of low-res cached previs models with varied animation cycles for archers, cavalry and soldiers populating the fields.

The action was then broken down into action beats, using specific battle formations and various camera shots (wide shots, crane shots, vehicle-mounted shots) to establish the geography for viewers and ensure hero characters remained visible in the crowd. Previs artists also worked with the art department on layouts that guided placement of props and piles of bodies at the physical shooting set. The “one’r shot,” which stays on Jon Snow in thick of the fighting through a series of obstacles and close calls, required particularly close-crafted choreography. Via techvis from The Third Floor, each pass required for the multi-layered final composite was mapped out with color-coded diagrams and Quicktimes to show what would need to be shot using practical cameras, stunt elements and CG effects.

Another challenge was the presence of the giant Wun Wun amidst the fray. All shots including the character, played by a real actor, required a secondary plate shoot and all of the main plate shoots needed to account for the giant’s virtual position for natural interaction and eyelines. Techvis calculated the height and position of the absent character and was used in designing shots and seamlessly believable coverage using both full-scale and miniature-scale Winterfell sets.