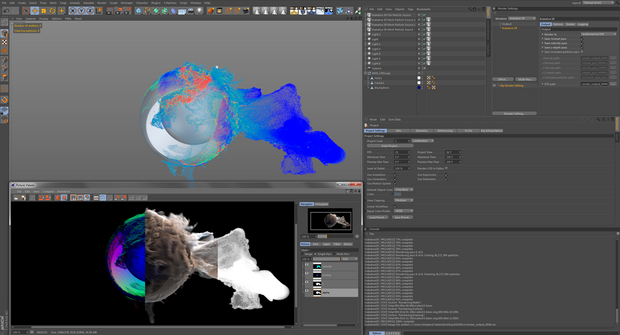 Los Angeles, CA -- Thinkbox Software announced that it has acquired code to bring its powerful particle renderer, Krakatoa, into MAXON’s CINEMA 4D modeling and animation software. Initial efforts to link the plug-in with CINEMA 4D were led by Ugly Kids artist Daniel Hennies, who collaborated with a developer to program a bridge to the stand-alone version of Krakatoa (SR). Leveraging the C++ API of Krakatoa SR, Hennies and a small team were able to fully integrate the particle renderer with CINEMA 4D and first demoed the technology at SIGGRAPH 2013.

“I was really motivated to incorporate Krakatoa into my workflow since the majority of my projects involve creating fluids, particles and high quality renders, which are time and memory intensive in CINEMA 4D,” explained Hennies. “I didn’t want to switch creative applications so I took matters into my own hands. Krakatoa renders blazingly fast in CINEMA 4D and handles particles in a way that wasn’t possible before. The plug-in was fun to develop and I’m eager to see it grow with the expertise and support of Thinkbox.”

“It is great news that Thinkbox and Daniel Hennies are enabling Krakatoa for CINEMA 4D; we've had multiple requests for Krakatoa. This bridge is a huge win for our users and I am looking forward to great artwork rendered with Krakatoa C4D,” noted Oliver Meiseberg, Product Manager CINEMA 4D, MAXON Computer.

“We’re super excited about bringing Krakatoa to CINEMA 4D and are thankful that Daniel has done the heavy lifting on integration,” said Chris Bond, founder, Thinkbox Software. “We’re always on the lookout for ways our solutions can better serve artists; extending support to additional software packages is just one of the many enhancements up our sleeve.”

Following the acquisition, Thinkbox is refining the tool’s feature set and plans to launch the official Krakatoa C4D Beta in early 2014. Krakatoa is currently available off-the-shelf for Autodesk Maya and Autodesk 3ds Max.