Steven Spielberg returns as executive producer a new edition of his popular animated variety show that originally ran from 1993-1998; joining Yakko, Wako and Dot are Pinky and the Brain, who return to continue their quest for world domination. 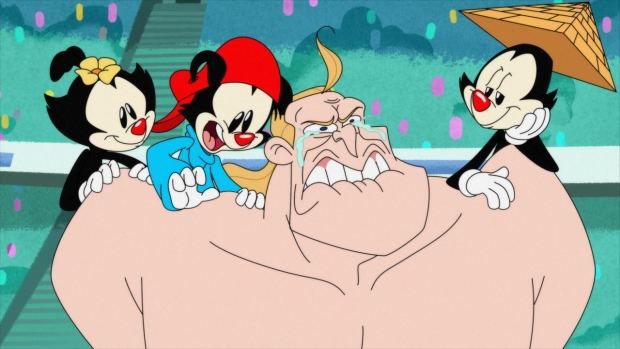 Check out the trailer for the all-new ‘Animaniacs:’

The Warner brothers, Yakko and Wakko, and the Warner sister Dot, have a great time wreaking havoc and mayhem on the lives of everyone they meet. After returning to their beloved home, the Warner Bros. water tower, the siblings waste no time in causing chaos and comic confusion as they run loose through the studio, turning the world into their personal playground. Joining Yakko, Wakko, and Dot, fan-favorite characters Pinky and the Brain also return to continue their quest for world domination.

The original Animaniacs made its television debut in 1993 and went on to become one of the most popular animated series for children. Since its premiere, the series has launched spin-offs and characters including Pinky and the Brain, and has set the record for most Daytime Emmy Awards in the field of Outstanding Achievement in Music Direction and Composition for any animated series, winning three times.

With its balance of humor, education, and pop culture references, Animaniacs also garnered a large adult fan following. Award-winning songs including “Yakko’s World” and "Wakko's America" continue to educate audiences and remain fan favorites among both adults and children, and the series continues to remain popular among online fanbases.