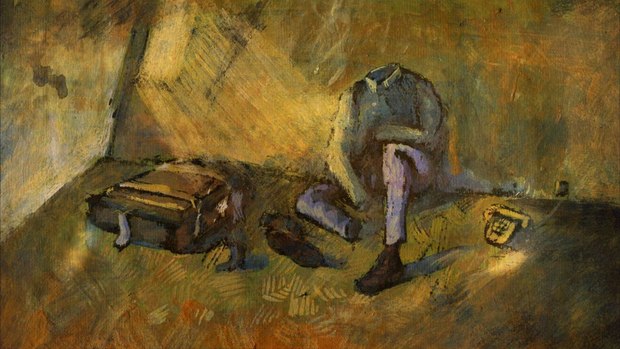 Theodore Ushev, director of the Oscar-nominated animated short, Blind Vaysha, is back with his latest piece, the hauntingly beautiful and highly-anticipated The Physics of Sorrow. Animated using the encaustic-painting technique, where heated beeswax, colored with various pigments, is applied to a surface, The Physics of Sorrow will premiere at the upcoming Toronto International Film Festival, which runs September 5-15, 2019.

The Physics of Sorrow (Clip #1) from NFB/marketing on Vimeo.

According to Ushev, he painted the slightly bleached beeswax mixed with pigments onto paper, then let it dry out. “It was an old recipe that my father gave me,” he noted. “After that, I make it hot so that it becomes liquefied. Then I can change the movement and colors. It’s very physically demanding. You have to paint very fast because the hot wax dries out quite quickly.”

Described in first century AD Roman writing and seen alongside Egyptian mummies from the same era, encaustic painting in an exacting and difficult artistic medium. Ushev’s choice was not random. “The first time capsules were the Egyptian tombs and coffins,” he explained. “They would put everyday objects alongside the buried person with an encaustic portrait on top of it. Encaustic was the first technique used to create realistic portraits of the dead on Egyptian sarcophagi, thus allowing the memory of the buried person to be preserved over centuries. With The Physics of Sorrow, I wanted to create a sarcophagus of my generation.”

The Physics of Sorrow: The Technique (Making-of) from NFB/marketing on Vimeo.