Collaboration with Danish studio NVRMIND blends animation with virtual and mixed reality to immerse viewers inside the fantasies of the Oscar-nominated director of ‘Blind Vaysha.’ 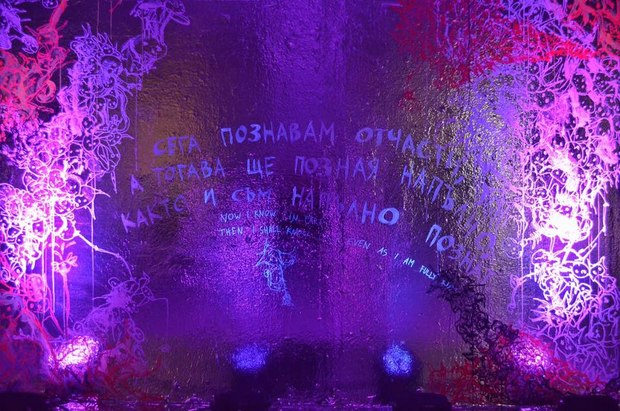 In a Mirror, Dimly is the first installation to employ the AnimVR software developed by Danish Virtual Reality lab NVRMIND for the new Samsung Odyssey Mixed Reality headset. The installation consists of large-scale paintings rendered on thermal safety rescue blankets alongside displays of video art and various other scattered objects, as well as “cocoons” outfitted with Mixed Reality headsets that allow users to see the animation drawn in VR. All of the animation and paintings were created using UV sensitive ink that can only be viewed under UV light.

The conceptual core of the exhibit, which employs images and the voices of political leaders such as Angela Merkel, Boyko Borisov, Vladimir Putin, Volen Siderov, Donald Trump and Kornelia Ninova, “is a protest against the personal, political and religious hypocrisy and falseness,” according to Ushev. The installation leads visitors through its three modules filled with allusions -- down to the very physical structure of the exhibit -- to the three-unit architecture of the Christian temple: Narthex, Naos and Altar.

Exploring the themes of vanity, lies and salvation as an individual and social act, Ushev “inscribes” his paintings with hidden messages, visible only with the assistance of ultraviolet light. By paraphrasing and referencing parts of the sacred texts Ecclesiastes and Corinthians, In a Mirror, Dimly represents a meditation “on the meaning and lack of meaning of the life beyond the seeming.”

The exhibit, which ran from February 20 through March 11, was funded under the Culture Program of Sofia Municipality in partnership with the Sofia City Art Gallery and the National Film Board of Canada. It was a big hit in Ushev’s native Bulgaria, where the opening reception saw more than 1,000 attendees and was covered by local news outlets. “It was a blast!” Ushev enthused. “The best thing that I ever did in my life! It doesn’t happen often with animation artists to have such an impact in society and the news!”

This is the second VR/AR project for Ushev, who previously created an experimental Virtual Reality version of his Academy Award-nominated short film, Blind Vaysha: Learn more about In a Mirror, Dimly at the Sofia City Art Gallery website.