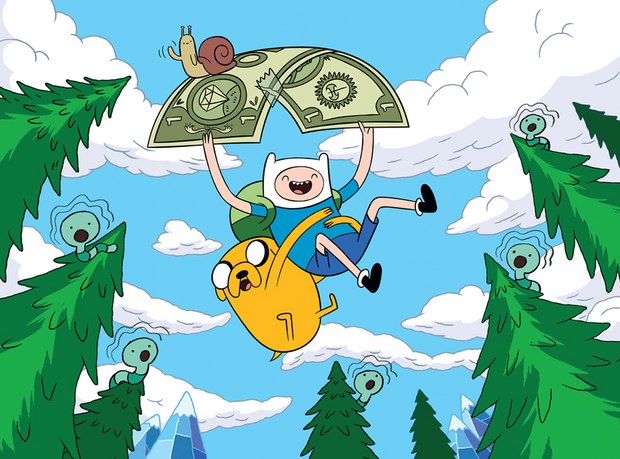 This fall, TELETOON viewers are in for a treat as the network announces its fall lineup with the anticipated return of the Emmy award-winning original animated series, Adventure Time (52 x 15 minutes) on Thursday, September 4 at 6 p.m. ET/PT. In Season 6, Finn discovers his father is alive leading him and his best friend Jake on an expedition to find him.

TELETOON kicks off its fall launch at FAN EXPO Canada in Toronto from August 28 to 31 bringing Adventure Time’s Land of Ooo to life. Fan favourite characters and voice actors, John DiMaggio (Jake) and Hynden Walch (Princess Bubblegum) will take part in the TELETOON screening and panel Saturday, August 30 at 2 p.m. (South building screening room 701), followed by an exclusive autograph session. Fans of the series will also have a chance to snap photos in the Ice King’s throne, spin the Peppermint Butler prize wheel and experience much more in the TELETOON booth located in the South building #1448 on level 800.

“We’re thrilled to be delivering a jam-packed schedule anchored by Adventure Time to lead in to new series Clarence and Total Drama: Pahkitew Island,” said Jocelyn Hamilton, Vice President, Programming and Original Productions, Corus Kids. “TELETOON is building on the success of its summer programming with the strength of its new original series and returning favorites this fall.”

The Gotta Gotta See It programming slate will be supported by an extensive four week marketing campaign that includes out-of-home transit and mall advertising, along with cinema and digital support. TELETOON will also be available on free preview until September 30.

CLARENCE (52 x 15 minutes) – NETWORK PREMIERE
Premieres: Thursdays at 6:15 p.m. ET/PT beginning September 4
From creator Skyler Page, Clarence is a new, original animated series about an optimistic boy who wants to do everything. Because everything is amazing! Clarence was conceived as part of the prolific shorts development program at Cartoon Network Studios, which has resulted in six original series for the network: Regular Show, Uncle Grandpa, Steven Universe, Clarence, Over the Garden Wall and We Bare Bears.

DR. DIMENSIONPANTS (26 x 22 minutes) – WORLD PREMIERE
Premieres: November 2014
Kyle Lipton was a normal, impulsive, 12-year-old kid. But all that changed when an interdimensional portal opened in his backyard and dropped a strange pair of glowing pants in his lap: The Dimensionpants. Kyle put on the pants and was transformed into Dr. Dimensionpants, a cosmic superhero with a pointy moustache and powers over space and time. Thanks to the Dimensionpants, young Kyle now has all the crazy-weird superhero powers he ever wanted… and more responsibility than he can handle! With the help of his talking unicorn mentor Philip, Dr. Dimensionpants must learn to master his powers as he saves the universe from unspeakable horrors on a semi-regular basis, all the while still having to deal with his normal, day-to-day kid issues -- homework, girls, and his annoyingly smart 7 year-old sister.

CHOP CHOP NINJA (40 X 1.5 minutes) – WORLD PREMIERE
Premiere date: November 2014
In 40 stand-alone short episodes, our lively ninjas use all their resources to complete a challenge in three tries. They leave it all on the floor, yet never succeed in completing even the simplest challenge. These non-verbal, highly cartoony stories allow the audience to see their favourite characters in action and learn (or not) that mistakes are always the best teachers.