Teletoon to Premiere ‘The Day My Butt Went Psycho’ June 12

‘The Day My Butt Went Psycho,’ a co-production from creative studios Nelvana and Studio Moshi, is set to air during TELETOON's Can't Miss Thursdays block. 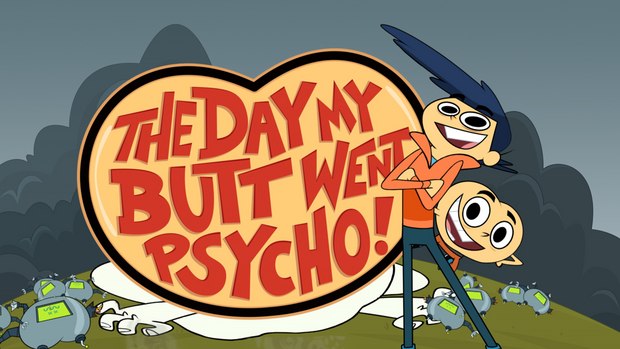 Toronto -- Imagine a very cheeky world, where goth butts and unicorn butts exist and where an ordinary boy named Zack is best buddies with his newly-detached butt, Deuce. Together, Zack and Deuce have a knack for fun adventures as they navigate a world where humans and their butts live side by side. This cheeky world becomes a reality (and a TV show) on June 12 at 6:30 p.m. ET/PT on TELETOON.

The Day My Butt Went Psycho, a hilarious 20 x 30-minute animated series, airs during TELETOON's Can't Miss Thursdays block. Additionally, on June 12, leading up to the series premiere, TELETOON's afternoon programming will be filled with butt-themed episodes of Adventure Time, Rocket Monkeys and Johnny Test. The series will also premiere in French as Mon derrière perd la tête day-and-date on Télétoon in Quebec.

The Day My Butt Went Psycho is based on Scholastic's best-selling book of the same name, penned by one of Australia's most popular children's authors, Andy Griffiths. The book made it to the New York Times and USA Today bestseller lists. Sequels include Zombie Butts from Uranus, and Butt Wars: The Final Conflict.

"We jumped at the opportunity to bring Andy Griffiths' book to the screen and are so proud to be involved in such a funny and a delightfully irreverent TV series," said Athena Georgaklis, Manager, Original Production for TELETOON Canada. "It makes the 10-year-old in all of us giggle." "I LOVE this cartoon! It's mad, funny and even more psycho than my novel ... and that's saying something!" said author Andy Griffiths.

The series takes place in the post-butt-revolution era, and follows our hero Zack who keeps the world safe from double-cheeked bad guys and dreams of becoming the greatest butt fighter of all time. And, having a genuine butt in your corner can be quite an advantage, especially when it comes to battling the bad butts.

Zack is voiced by Toronto's Mac Heywood (Totally Spies). Actor Rob Tinkler, whose career has seen him lend his chops to everything from re-occurring roles on American Dad, Grumpy Bear on The Carebears, the Pillsbury Doughboy and various roles on Sailor Moon, brings life to Zack's sidekick butt, Deuce. The series is a co-production from award-winning creative studios Nelvana (Canada) and Studio Moshi (Australia.) in association with Scholastic. It is directed by Matt Ferguson (Scaredy Squirrel). The show first premiered on Australia's Nine Network in September 2013.