With season two of ‘Rocket Monkeys’ kicking off November 5, TELETOON commissions a third season of the hit show. 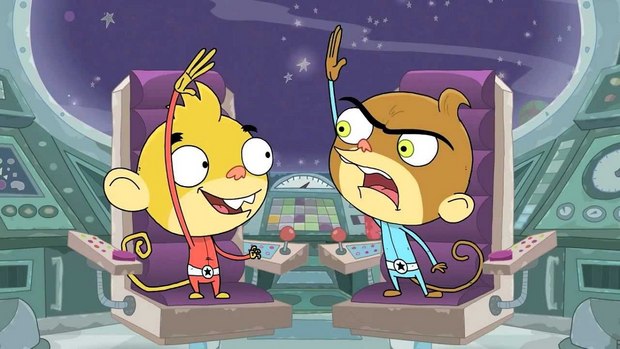 Produced by Breakthrough Entertainment in association with TELETOON and animation studio Atomic Cartoons, Rocket Monkeys features hapless monkeynaut brothers Gus (voiced by Sean Cullen) and Wally (voiced by Mark Edwards) who become inexplicably charged with carrying out all kinds of important missions – and cause more intergalactic catastrophes than they could ever prevent. Luckily, they have plenty of help from YAY-OK (voiced by David Berni), their dashing and devoted (if slightly outdated) robot.  While they may be operating on limited brainpower and even less guts, Gus and Wally do have a hunger for adventure -- and by “adventure” we mostly mean “bananas.”

“Rocket Monkeys has been captivating TELETOON audiences since its launch,” says Athena Georgaklis, Director of Content at TELETOON.  “We are looking forward to a third season of this hilariously outrageous show.”

“There goes the universe...again. Just when we thought space was safe, Rocket Monkeys’ Gus and Wally are back to wreak havoc across the galaxy, one disastrous mission at a time! We are thrilled to join TELETOON to begin production on yet another series of 26 all-new Rocket Monkeys episodes,” said Joan Lambur, Executive Vice President, Family Entertainment for Breakthrough Entertainment.

“Rocket Monkeys has made us quite happy to be in the monkey business. In today’s hotly competitive kid’s arena, Rocket Monkeys has emerged as a brilliantly produced hit series that continues to attract loyal legions of kid viewers.  We are excited to showcase the new adventures of Gus and Wally here at MIPCOM,” said Abraham.