‘Teen Titans Go! to the Movies’ Coming to Blu-ray and DVD 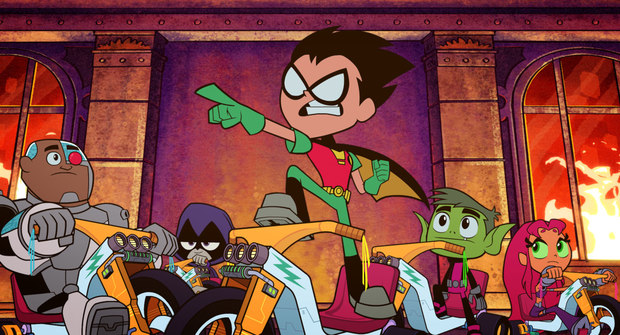 Burbank, CA – Warner Home Entertainment has announced that Teen Titan’s Go! to the Movies will be released on Blu-ray Combo Pack and DVD on October 30, with the digital edition available October 9. Peter Rida Michail and Aaron Horvath directed the film from a screenplay by Michael Jelenic and Horvath, which is based on characters from DC. Horvath, Jelenic, Peggy Regan, Michail and Arnett produced the film with Sam Register serving as executive producer. The music is by Jared Faber. Superman was created by Jerry Siegel and Joe Shuster.

Teen Titans GO! to the Movies will be available on Blu-ray Combo Pack for $35.99 and DVD for $28.98. The Blu-ray Combo Pack features a Blu-ray disc with the film and special features in high definition, a DVD with the film in standard definition and a Digital version of the movie. Blu-ray special features are filled with music and fun, including the DC Super Hero Girls: The Late Batsby mini-movie, sing-a-longs, a hilarious look at the Teen Titans characters dubbing their favorite lines in other languages in Teen Titans GO!: Translated plus much more!