Technicolor’s ‘The Deep’ Diving into Aquariums in the U.K. & Germany

Technicolor partners with Merlin Entertainments Group to create dynamic experiences for the underwater adventure series ‘The Deep’ at over 20 sea life aquariums. 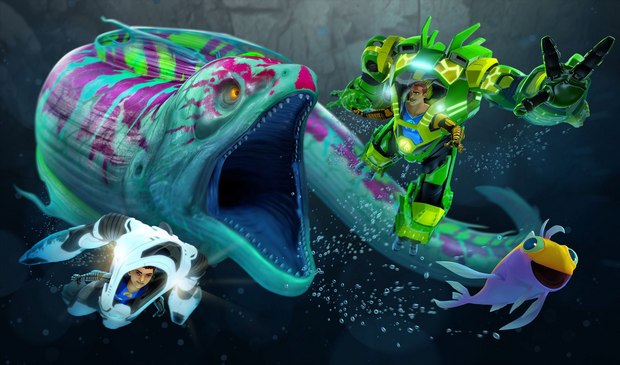 Technicolor has signed a cross-promotional agreement with Merlin Entertainments Group, a worldwide leader in branded, location-based family entertainment, to create interactive entertainment experiences for the animated underwater adventure series The Deep at over 20 SEA LIFE aquariums in the U.K. and Germany. The events are timed to support the launch of the series’ second season, alongside a new mobile game from DHX Interactive, DHX Media’s award-winning interactive unit.

Technicolor is the underlying rights holder to The Deep, a co-production between Australia-based A Stark Production (scripts, design, music) and Canada-based DHX Media (animation, voices, post-production), and has oversight for the brand overall.

The Deep SEA LIFE aquarium events, co-developed in a partnership between Technicolor and Merlin Entertainments, kicked-off this weekend in the UK and will run through November 2017 at multiple locations, with the German market events to launch in October 2017. At each SEA LIFE aquarium, children will be invited to solve the secrets of The Deep, navigating the zones of the aquarium for clues to become a Junior Nekton. SEA LIFE is the world’s biggest aquarium brand with locations across the UK, Continental Europe, North America and the Asia Pacific region, built around the concept of “Amazing Discoveries.” Coinciding with the SEA LIFE promotion, as well as the season two launch of The Deep, DHX Interactive has released the first mobile game based on the show. The Deep: Sea of Shadows launched in the App Store and Google Play on August 17, 2017, in multiple territories, in both English and German. In this exciting action/adventure game, players help the Nektons unravel the mystery of a strange dark ink corrupting the sea.

“When fans connect with a property as they have with The Deep, they want to be involved in it across many areas,” commented Pam Kunick Cohen, Head of Brand Management, Licensing and Merchandising, Technicolor. “We can’t think of a better way to kick off the show’s new season and get fans engaged with the brand in an authentic way than with our promotion at Merlin Entertainments’ SEA LIFE aquariums.”

“The Deep inspires interest in creatures of the ocean, their habitats and how we interact with them, which is why we are delighted to be involved in this venture,” added Cheska Bennett, Head of Marketing - Midway UK & Ireland, Merlin Entertainments. “The exclusive event experience provides SEA LIFE guests with a fun and interactive means to discover the amazing stories of the oceans, alongside some of their favorite TV characters.”

“The underwater adventures of The Deep continue to thrill kids and families, and we’re delighted to be a part of the show’s global success,” Ken Faier, SVP and Executive Producer, Content at DHX Media said. “We’re confident that these new SEA LIFE entertainment experiences, coupled with the release of the first mobile game, will keep audiences wanting more of The Deep’s Nekton family.”

Technicolor manages the The Deep’s brand’s licensing extensions with CPLG, a DHX Media company and one of the world’s leading licensing agencies, serving as the multi-territory licensing agent for the brand, including North America, EMEA (excluding Germany) and Latin America. Distribution for The Deep is handled by DHX Media. DHX Media also handles distribution for the series.

The Deep follows the adventures of the Nekton family -- a brilliant team of underwater explorers. With state-of-the-art technology and an unquenchable thirst for discovery, the Nektons explore the mysterious depths of the ocean, where most of our world lies unexplored and unexplained. While others look up to the stars, this family knows that an infinite number of things shine brightly in the darkness below. The Deep is a place where leviathans swim through sunken cities, where pirates lurk amidst floating black markets, and where a mysterious group of Guardians hide long lost secrets.

The series is based on the Aurealis Award-winning graphic novel series created by multi-award-winning best-selling comic book author and playwright Tom Taylor (Earth 2, Superior Iron Man, Batman: Legends of the Dark Knight, Injustice: Gods Among Us, Star Wars: Blood Ties), illustrated by James Brouwer (Justice League Beyond), and published by Gestalt Comics. Taylor serves as co-creator and lead writer of the series and Brouwer serves as co-creator and art director.