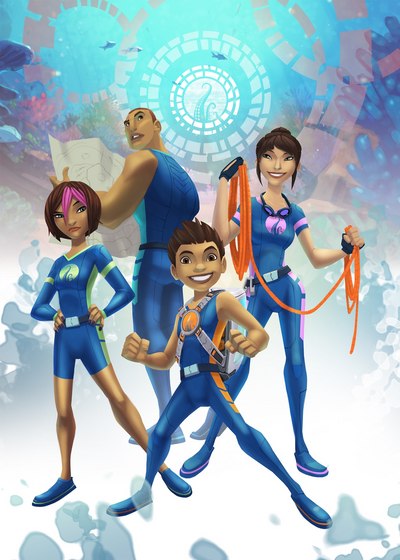 The Deep -- a 26 half-hour episode series targeting kids 6 to 12 years old and their families -- is based on the international hit graphic novel series created by multi-award-winning best-selling comic book author and playwright Tom Taylor (Batman: Legends of the Dark Knight, Injustice: Gods Among Us, Star Wars: Blood Ties), illustrated by James Brouwer (Justice League Beyond), and published by Gestalt Comics. Taylor will serve as head writer for the series, and Brouwer will serve as art director.

A Stark Production is handling pre-production and music for The Deep, including designs, scripts and storyboards; and Nerd Corps Entertainment is responsible for animation production -- including voice talent, CG models and animation through final picture and sound. Technicolor is managing the global broadcast rollout of the series and developing brand extension licensing opportunities.

“The combined talents of A Stark Production and Nerd Corps Entertainment are a creative powerhouse capable of delivering a spectacular animated adventure series,” said Alison Warner, VP, IP Sales, Acquisitions and Co-Productions at Technicolor. “To have attracted such a high-caliber European broadcast partner as Super RTL speaks to the uniqueness of this incredibly imaginative project, and we are anticipating an enthusiastic response from potential television partners around the world when we meet with them at MIPJunior and MIPCOM.”

“The unique blend of undersea adventures, science and family dynamics make The Deep a fantastic property, and we’re thrilled to be working with such great partners as A Stark Production and Technicolor,” said Asaph Fipke, CEO and founder of Nerd Corps.

“Nerd Corps Entertainment is the final piece of the puzzle that will catapult The Deep into the next vital stage of development and production,” added Avrill Stark, CEO & Executive Producer, A Stark Production. “With ABC and The Seven Network commissioning the series, we have incredible broadcast partners already in Australia, and with strong demand from the global market, it’s all systems go now.”

The Deep follows the incredible adventures of the Nekton family, underwater explorers comprised of the independent and fearless 12-year-old Antaeus (Ant); his analytical 15-year-old sister Fontaine, an astute navigator; and their parents Will, an oceanographer, and Kaiko, a marine biologist; and, of course… Ant’s pet fish! Continuing a long family legacy, the Nekton’s live aboard a state of the art submarine, the Aronnax, while exploring uncharted areas of the earth’s oceans to unravel the mysteries of the deep sea.