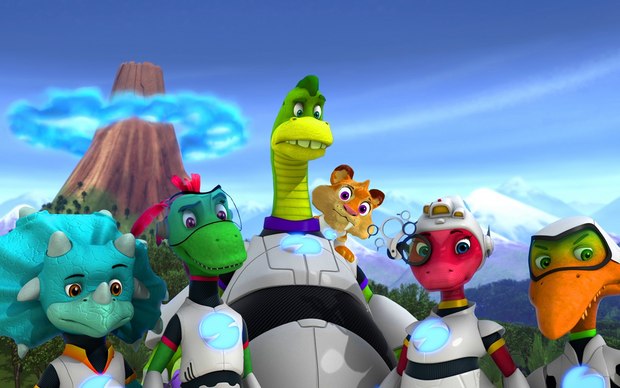 Technicolor has optioned the rights to develop and produce Supersaurus 7, a children’s comedy adventure series featuring the world’s first superhero dinosaurs. The agreement was reached with Chris Hayward, co-creator of the BBC web series Misery Bear and writer of the BAFTA-nominated CBBC series FIT, and creative director, designer and illustrator Henry Coate.

Set on a reimagined planet earth, the prehistoric sprawling continent of Pangea, long before human existence, Supersaurus 7 follows the comedic adventures of a group of young dinosaurs who chance upon a mysterious blue lava flowing from the very core of the Earth, whose energy transforms them into superhero dinosaurs. Each is armed with a super power that amplifies their dinosaur traits, and when they work together they can be an indomitable force, that is if they can learn to use their new powers correctly! Fending off rampaging T-Rex's, rescuing distressed dinos from erupting volcanoes, and zapping incoming asteroids, these hot-headed, heroic and technologically advanced young dinosaurs strive to save the day. They also have to confront the rise of a new threat, the mammals, led by a despotic Gerbil with short rodent syndrome.

"Chris and Henry have created an original concept in a much loved genre that we haven’t yet seen in kids’ entertainment – dinosaurs as super heroes – two themes that kids everywhere have always loved,” commented Alison Warner, VP of IP Sales, Acquisitions & Co-Productions. “We believe that viewers will identify with our characters, who are in effect just kids learning to handle their new skills, while taking on some of the strangest and stupidest foes ever seen in a prehistoric world! A perfect blend of action and comedy to engage and thrill our audience!”

"We are thrilled to be working with Technicolor and are striving to make Supersaurus 7 super exciting and ridiculously funny, so children across the world will laugh, cheer... and roar," added Hawyard and Coate in a joint statement.