Technicolor and Nekton to Partner on ‘The Deep’ Education-Entertainment Development 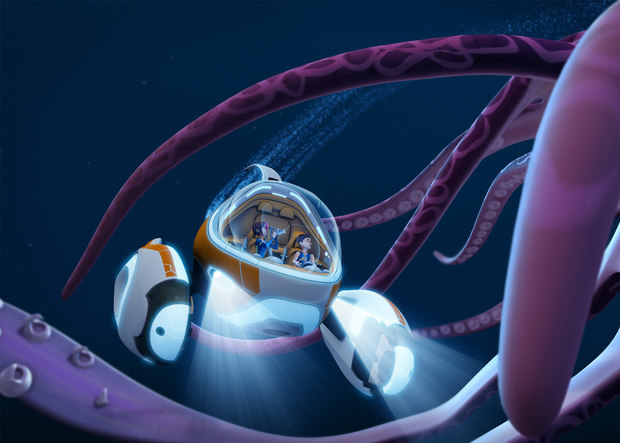 PARIS -- Education and entertainment are at the core of an innovative new partnership between Technicolor and Nekton Oxford Deep Ocean Exploration Institute for the animated underwater adventure series, The Deep, based on Tom Taylor’s graphic novel series of the same name. The announcement was made by Pam Kunick-Cohen, head of brand management, licensing and merchandising, Technicolor, and Oliver Steeds, CEO, Nekton.

Focusing on the myriad benefits of ocean exploration and discovery, Nekton, pioneers in deep ocean exploration, becomes an official educational partner and consultant for The Deep, which coincidentally features the Nekton Family – a brilliant team of underwater explorers. Through the strategic partnership, Technicolor and Nekton will produce co-branded STEM materials and videos featuring characters from The Deep and real-life content from Nekton’s missions that can be shared across platforms and with schools globally, along with aquarium partners. They will also develop a major consumer promotion for The Deep that coincides with Nekton’s phase-two Mission – exploring the Indian Ocean, the planet’s least known ocean.

“The adventures of The Deep’s Nekton family taps into the explorer in all of us, and our partnership with Nekton, conducting real-life oceanic exploration, will provide a multitude of opportunities to inspire young people and increase their interest in the ocean, the health of which is under serious threat,” commented Kunick Cohen.

“By partnering with Technicolor and The Deep, which has engaged children around the world with the adventures and discoveries of this family of explorers, we can combine entertainment content with our own mission to increase young people’s knowledge and interest in the ocean,” added Steeds.  “In our first Mission, we reached over one million students with our Submarine STEM program, and by harnessing this unique relationship, believe we can massively increase the number of young people we can inspire – in fact, we must, for the benefit of humankind.”

Global audiences were captivated with the organization’s first Mission, the XL Catlin Deep Ocean Survey, with manned submersibles in the North West Atlantic Ocean that started in 2016.  The Mission has already reached a global audience of over 800 million via featured live broadcasts and daily video, print and photographic content from the submersibles.  Over 100 new species were discovered in Mission I, and 500 new species are expected to be discovered in Mission II.

Nekton works in collaboration with the University of Oxford and is funded by a combination of income from foundations, corporate and science/education institutions, along with individual donors to accelerate scientific discovery and ocean governance, and combines scientific research ocean policy, public engagement, and education.

As The Deep creator Tom Taylor explains, “I based my series’ adventures on underwater explorations because I truly believe it is our last final frontier, and it’s right here at home, this massive and amazing ocean which is at least 95% unexplored.  There are creatures living down there that we have never seen, and we have no idea about their existence.”

The Deep follows the adventures of the Nekton family, a brilliant team of underwater explorers. With state-of-the-art technology and an unquenchable thirst for discovery, the Nektons explore the mysterious depths of the ocean, where most of our world lies unexplored and unexplained.

Capturing a loyal, international fan base, The Deep airs on broadcast and streaming networks worldwide in more than 130 markets. The series is a co-production between Australia-based A Stark Production (scripts, design, and music) and Canada-based DHX Media (CG production, voices, and post-production), with distribution also handled by DHX Media. Technicolor, underlying rights holder to The Deep, has oversight of the brand’s licensing extensions, with CPLG, a DHX Media company and one of the world’s leading licensing agencies, serving as the multi-territory licensing agent for the brand, including North America, EMEA (excluding Germany where the brand is represented by Super RTL) and Latin America.

The Deep was originally optioned from Nekton Productions. The television series is based on the Aurealis Award-winning graphic novel series, The Deep, which was created by New York Times Bestselling comic author and screenwriter Tom Taylor (X-Men: Red, Iron Man, Batman/Superman, All-New Wolverine, Injustice: Gods Among Us, Star Wars Adventures) and co-creator, artist James Brouwer (Justice League Beyond), and published by Wolfgang Bylsma and Skye Ogden’s Gestalt Comics. Robert Chandler serves as an executive producer on the television series, on behalf of Nekton Productions.