Children Around the World initiative’s PSA helps kids return to school in the COVID-19 era, while learning how to protect themselves and their communities. 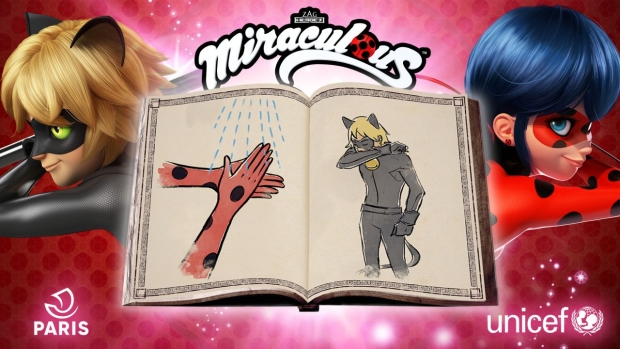 As kids head back to school in the shadow of COVID-19 global pandemic, they need to take steps to protect themselves and their communities. ZAG and ON kids & family, have joined forces with the support of Paris City Hall and UNICEF, to provide important information to children with a new PSA featuring the popular global super stars of the animated action-comedy series, Miraculous - Tales of Ladybug & Cat Noir. In the new PSA, Ladybug and Cat Noir teach children how to practice effective handwashing, hygienic sneezing, social distancing and more to help keep families, friends, and the community safe.

“With so many challenges facing the world now, our mission was to develop an initiative that focused more on creating solutions that teach and educate children in a positive and protective way instead of perpetuating fear,” commented ZAG founder and CEO, Jeremy Zag. “We would like to thank UNICEF for choosing Miraculous to convey an important message that we are so proud to stand behind. Our studios and our superheroes will always be ready to fight for a good cause, and we are very happy to be supported by all our global partners in the production of this PSA.”

"At the heart of this unprecedented crisis where children are considered adults, there was a need to find a way to make them aware of the importance of protecting themselves and others by staying fun and childlike, while relieving anxiety,” added On kids & family cofounder and president, Aton Soumach. “And who better than their two favorite superheroes to make the message the most effective? We are fortunate to be the producers of a series with two aspirational and reassuring superheroes, known around the world and unanimously supported by our broadcasters.”

Empowering and inspirational, Miraculous embraces values for the entire family and has become a digital planetary craze with over 16 billion views on YouTube (authorized and of user-generated content); over 100 Million downloads on its mobile app; and over 150M products have been sold during the past three years. The series is the winner of 13 awards, including the 2018 Teen Choice Award for Choice Animated Series; it airs in over 120 countries across the globe.

Set in the city of Paris, Miraculous follows the adventures of two seemingly typical teens with secret identities, Marinette, and Adrien, who magically transform into superheroes, Ladybug and Cat Noir. As secret superheroes, they are partners in the action but during daytime, Marinette is just a normal girl, living a normal life. Cat Noir will do anything to support and impress Ladybug, however he does not know that Ladybug is Marinette from his class -the regular girl who dreams of Adrien while getting little response.

Miraculous - Tales of Ladybug & Cat Noir TV Series (130 x 22’) series is currently in production for season’s four and five. The series targets Girls 6–12 and Boys 4–7, with a fangirl base of “Miraculers” (Girls 15–25). The series is created by ZAG and produced by ZAG and ON Kids & Family (Mediawan Group). Co-production partners for seasons four and five include France’s Method Animation (part of ON Kids & Family), Brazil’s Globosat and Italy’s DeAgostini Editore S.P.A., in collaboration with Disney Channel EMEA, French broadcaster TF1, South Korea’s SamG Animation and Japan’s Toei Animation.