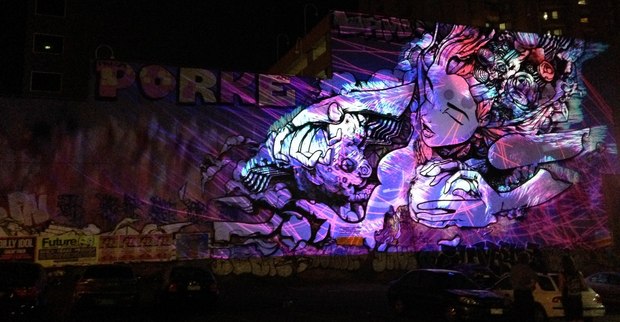 TDC provided the technology and expertise behind a world first graffiti-mapping artwork projected onto the largest mural in Melbourne – spanning 5 stories high and 70 metres long. This groundbreaking piece of street art was one of the highlights of White Night Melbourne 2015, a 12-hour nocturnal extravaganza running from 7pm to 7am, inspired by Paris’ Nuit Blanche and the international network of White Night programmes around the world.

“And TDC is clearly no stranger to world first uses of projection mapping tech or, for that matter, to White Night,” adds Walsh, “having been one of our go-to, trusted technology service providers for a number of years now.”

TDC are a preferred technology supplier of White Night Melbourne, provided video projection technology and expertise to a number of the various exhibits across the event’s impressive schedule this year.

This year was the first time that White Night Melbourne had worked with street art, presenting Sofles – Graffiti Mapped, a pioneering interactive mural project curated by Juddy Roller exploring the interconnected nature of street art, technology and the online frontier.

“The load in times were incredibly tight indeed! Yet it was a true delight to work on such a groundbreaking street art project. The merging of street art with the latest projection mapping tech created a visual spectacular that is clearly going to set a trend for future projects. These types of projects always help our team to test the technologies that we use to the absolute limit, which means that we are constantly using them in new and exciting ways.”

“Projection mapping means so much for artists in being able to express their artwork using technology,” explains Shaun Hassack, Owner at Juddy Roller, who personally selected Sofles and worked closely with the production team setting up the event over four days – after Sofles had created the initial artwork to create the canvas.

“The façade had quite a lot of negative space that helped with motion designers to have creativity and freedom to design the piece,” adds Hassock. “The narrative includes peace, war, technological advancement to ultimate destruction and re-birth”. And TDC was absolutely vital to the entire project in bringing Sofles’ work to life! TDC were already a known and trusted partner of White Night. Plus, animation artist Grant Osborne already knew TDC, so naturally we said we wanted to work with TDC for 3D projection mapping.”

“TDC managed all the large scale technical stuff and the work when it came to projection,” says Hossack. “All of which, operationally, ran very smoothly indeed. In future, we’d like to bring in a little more interactivity and use lighting designers to bring the audience a little more into it. That would be next logical step forward. So watch this space!

“I had always worked with street artists as a project manager and creative director, so White Night Melbourne was an amazing opportunity to bring it all together, where we created the world first graffiti mapping – something that had never been done before. And something that we think left a deep and lasting impression on the Melbourne skyline long after the lights went out at this year’s festival.”