Ahead of its January 24 Season 17 premiere, the hugely popular animated adult comedy from 20th Television Animation gets renewed for 2 more seasons; brace yourselves for more comic misadventures of Stan Smith and his family. 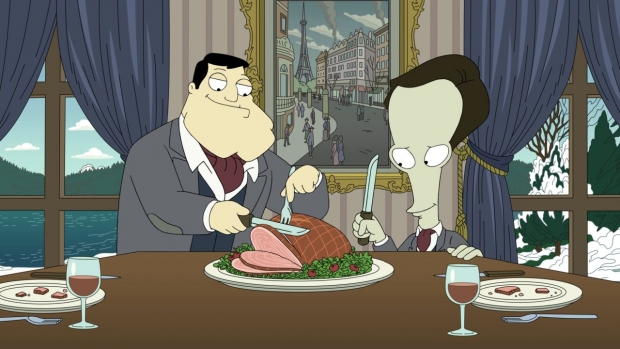 With the Season 17 premiere of 2D animated adult comedy American Dad! right around the corner, TBS has just renewed the hugely popular show for Seasons 18 and 19. Co-creator Matt Weitzman and executive producer Brian Boyle have signed new deals continuing their roles for the additional seasons on the series, which is produced by 20th Television Animation. So, get ready for Season 17 (NOT the final season!) of American Dad! premiering on Monday, January 24, on TBS at 10:00 p.m. ET/9:00 p.m. CT.

“American Dad! is reaching rarified air with 18th and 19th season pickups that only a handful of shows have ever accomplished; this speaks to the zeitgeisty humor that resonates with audiences, and to the dedication of its creators and brilliant TBS network executives,” shared TBS, TNT, truTV co-heads of Scripted Programming, Adrienne O’Riain and Sam Linsky.

“We are all so grateful to TBS for this two-season pickup,” added Weitzman. “Getting Seasons 18 and 19 means we will finally be able to tell the stories we only dreamed of telling in seasons 16 and 17. Much thanks also to everyone at 20th Television Animation for all their continued support of American Dad's many years of corrupting our nation's, nay, the world's youth... most of whom are now about to turn 40."

“We’re so happy TBS wants us to keep going!” remarked Boyle. “And this two-season pickup is emblematic of the efficiency TBS is known for – they work half, and we work double. Since we started our collaboration with TBS, they have let us take the show any direction we wish – undirected – because they are wise enough to value the free imaginations of the half insane. At least to sell naked chicken chalupas or whatever.”

The show follows the super patriotic CIA agent Stan Smith (voiced by Seth MacFarlane) and the misadventures of his unconventional family in Langley Falls, VA. Stan applies the same drastic measures used in his job at the CIA to his home life, where his blissfully unaware wife, Francine (Wendy Schaal), has an unfaltering loyalty that makes her blind to his unabashed arrogance. His left-wing activist daughter Hayley (Rachael MacFarlane), however, doesn’t let him off so easily – and knows just how to push her father's buttons. Hayley's brother is the geeky-yet-confident Steve (Scott Grimes), a kid who spends his time playing video games and obsessing about the opposite sex. The Smith cabinet is rounded out by two rather unconventional members: Roger (MacFarlane), a sassy, sarcastic and routinely inappropriate space alien, and Klaus (Dee Bradley Baker), an attention-starved goldfish with the brain of a German Olympic skier.

The animated comedy from 20th Television Animation was created by MacFarlane, Mike Barker, and Weitzman, and is executive produced by co-showrunner Boyle along with MacFarlane and Weitzman.