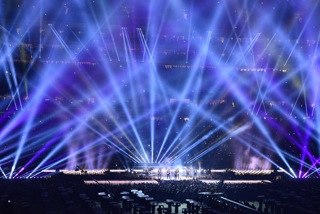 “We wanted everyone in attendance to have a great time and enjoy this technology, and for all of the people at home to say, ‘Wow, it must be amazing to be there,’” remarks Jennison. “It's an unprecedented way of presenting interactive content in live venues.”

“Bruno wanted the halftime show to be a big party, and last night was exactly that,” adds TBL Executive Producer Kenny Pedini. “Everyone in the sold-out crowd was literally part of the show.”

"Getting to know Bruno as an artist, what has always stood out to me is his old-school personality,” Jennison explains. “He's an old soul who likes being on stage with his band, under the lights and playing the music. I wanted the content to honor that by keeping it musical and reflective of his level of energy and showmanship."

Pre-visualizing large-scale content for MetLife Stadium presented the TBL team with technical challenges from the outset. They first built a model of the stadium in 3D compositing software. All of the content was then animated in After Effects and plastered on the model for testing.

“We had to start small and everything had to be precisely scaled," elaborates Jennison. "I also wanted to establish the best-case scenario early on if everyone had their LED caps on. We pixelated the seating charts accordingly and fed that data into the 3D model.”

Anticipating intangibles such as audience movement, empty seats or a hatless fan, TBL conducted extensive R&D to fine tune the definition of the content as well as to lay out their margins of error. Pedini and Jennison were also on hand for the live rehearsals and in attendance at the game to sign off on the projections before the lights went down.

“Fortunately, everything went off without a hitch,” concludes Pedini. “The Super Bowl is the biggest stage in the world, and it was our job to make Bruno, Pepsi, the NFL, and everyone involved look good. Is that a lot of pressure? You bet. Is it all worth it? Absolutely! To stand on that field and see our work going on all around us – there’s nothing better.”