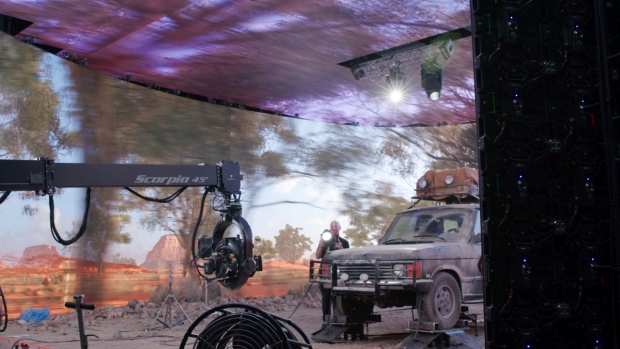 The Unreal Engine team at Epic Games has shared a new short, Unreal Engine 4.27 In-Camera VFX Test, as well as a companion behind-the-scenes featurette that goes on-set to break down how the test was done.

The test showcases the latest in-camera VFX tools in Unreal Engine 4.27. The BTS video features a number of filmmakers detailing how these new processes positively impact every step of the production process.

Now, go on-set and check out how the short was produced:

The project began when Epic Games and filmmakers’ collective Bullitt assembled a team to check out the latest in-camera VFX toolset, part of the extensive suite of virtual production tools in the upcoming Unreal Engine 4.27 release. To get a better sense how each of these new tools performed, the group created a short test piece to mimic a production workflow.

Shot entirely on NantStudios’ LED stage in Los Angeles, the production test capitalized on new workflows that enable dynamic lighting and background changes on set with minimal downtime, together with multi-camera and traveling vehicle shoots. It also harnessed the power of twin NVIDIA Quadro A6000 GPUs. The team was able to produce final pixels in just four days – amply demonstrating the efficiency and creative freedom the toolset offers.

The team also took advantage of new Level Snapshots that enable directors to easily match previous takes when returning to an earlier set or lighting configuration; sophisticated remote control UI building tools that offer creatives direct control of the Unreal Engine-powered elements of the shoot from the convenience of a tablet or laptop; and OpenColorIO color management that ensures artists creating Unreal Engine assets can see what the final captured output will look like.