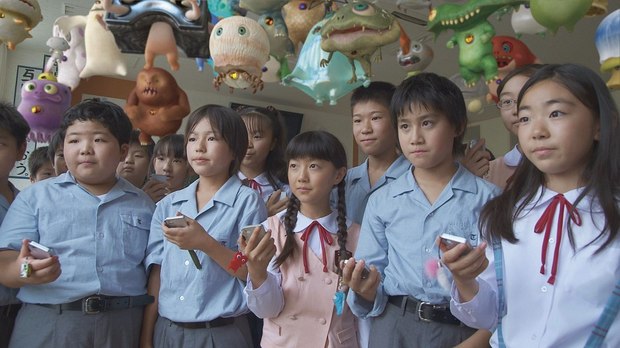 Kaikai Kiki Co. and Blum & Poe have announced that world-renowned visual artist Takashi Murakami's debut film Jellyfish Eyes will tour nationwide, screening at cultural institutions in eight US cities. Jellyfish Eyes transforms the classic cinematic trope of the new kid on the block into a genre-defying adventure set in a post-Fukushima world.  The film follows young Masashi who, after his father's death, moves with his mother to a small city in the Japanese countryside. But when he discovers that their new apartment is already inhabited by a pint-sized, gravity-defying creature, Masashi begins to pull back the curtain on this sleepy town and finds that very little is what it appears to be.  As a connoisseur of Japanese popular culture, from children's manga and anime to classic monster movies, Murakami packs his film with a delirious abundance of ideas and imagery.

The film will screen at major art institutions across the country as well as The Theatre at Ace Hotel in Los Angeles and Film Society of Lincoln Center in New York.

Born in Tokyo in 1962, Takashi Murakami is one of the most influential and acclaimed artists to have emerged from Asia in the late twentieth century. His work has been exhibited extensively in venues around the world, including the Palace of Versailles; Museum of Contemporary Art, Los Angeles; Brooklyn Museum; Guggenheim Museum, Bilbao; Museum of Contemporary Art, Tokyo; and Museum of Fine Arts, Boston. Murakami is also well known for his collaborations in the fashion and music worlds, including work with Louis Vuitton, Kanye and Pharrell.

CHICAGO, IL
MUSEUM OF CONTEMPORARY ART
May 25
*Takashi Murakami in person for post-screening Q&A
Tickets on sale now at www.mcachicago.org

For more information on the film and screenings visit: jellyfisheyesthemovie.com