TAAFI Announces ‘Inside Out’ Screening & Masterclass

Special Toronto screening of Pixar’s ‘Inside Out’ to be followed by a Q&A and Masterclass with the film’s story supervisor Josh Cooley. 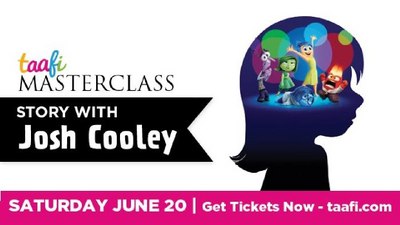 The Toronto Animation Arts Festival International will be presenting a special screening of Pixar’s Inside Out along with a Masterclass with story supervisor Josh Cooley on Saturday, June 20.

Cooley, named one of Variety’s top “10 Animators to Watch in 2015,” will present a backstage look at the story process utilized on Academy Award-winning Pixar films during this rare Masterclass opportunity in Toronto, delving into everything from building story structure and creating believable characters to telling emotional stories and more.

Private Inside Out screening and Q&A with Josh Cooley (Screening)
9:00am - 11:45am
Cineplex Cinemas Yonge Dundas
10 Dundas Street East, Toronto, ON M5B 2G9

Tickets are priced at $199 and can be purchased now at taafi.com/masterclass.

Toronto’s animation festival, TAAFI, was developed to celebrate the many forms of animation from around the world and to support and nurture the industry and community that creates it. With the events like Animation Job Fair, Masterclasses and ongoing screenings, TAAFI is a tentpole animation organization in the international landscape. TAAFI will return for a fourth year April 22-24, 2016.