Inspired by the writings and drawings of Federico Fellini, ‘The Thousand Miles’ marks the four-time Academy Award-nominated director’s highly-anticipated return to feature animation following his 2003 debut, ‘The Triplets of Belleville,’ and 2010’s ‘The Illusionist.’ 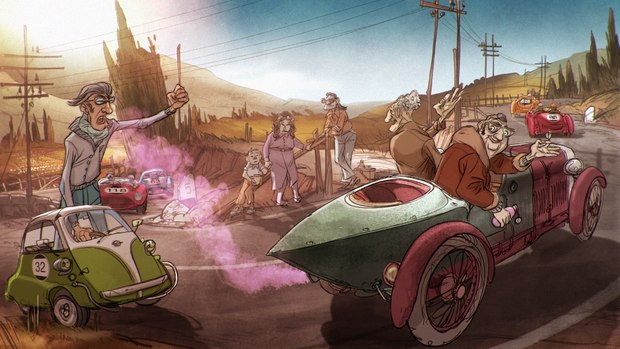 More than a year-and-a-half since news of its development first broke, Sylvain Chomet‘s new film, The Thousand Miles, is moving into production, according to a report by Variety.

Developed and produced by U.K. banner Savoy & Gregory, The Thousand Miles is inspired by various works and unpublished writings and drawings of Federico Fellini. Demian Gregory and Tommaso Rossellini co-wrote the screenplay.

Italian prince Emanuele Filiberto stars as a middle-aged count who takes part in Le Mille Miglia (The Thousand Mile), one of the world’s oldest and most prestigious car races. The journey transforms into a magical odyssey during which the count reminisces on his youth and life experiences. The film will weave live-action footage and hand-drawn animation to portray the count’s souvenirs. Filiberto will lend his voice and image to the film, and will star in the live-action scenes. Two brothers, separated by life’s events but reunited by an old dream -- of taking part of the world famous car race, the thousand miles. Adelmo is the talented and successful older brother. he used to be an acclaimed movie director -- chatty, flamboyant, and gregarious. He will remind many of Federico Fellini. Umberto, known fondly as ‘Beppino’ as a child, is the quiet one. He’s a dreamer and stargazer. According to modern standards, his life has been less successful -- especially the last two decades, which he has spent in jail. As the duo heads towards the start line in Brescia in their old Amilcar, the audience relives some major episodes of their past through a series of flashback which visit key moments in their mutual journey, from their happy childhood, when life was sumptuous -- full of laughter and colors, to the wretched battlefields of World War II and through to the ‘dolce vita’ of Rome in the nineteen sixties.

The Thousand Miles marks the four-time Academy Award-nominated Chomet’s highly-anticipated return to feature animation following his 2003 debut, The Triplets of Belleville, and 2010’s The Illusionist. Having completed a lengthy development process, Chomet and his animation team will reportedly initiate character design and storyboarding later this month, followed by production animation with actors. Although produced out of London, Savoy & Gregory have set up animation studios in Southern France and Italy to handle film’s physical animation. Post-production will be performed out of Canada.

The Thousand Miles is slated for a 2017 release.

Head over to Variety to read the full story, and check out Chomet’s early animated short, The Old Lady and the Pigeons, in the player below: