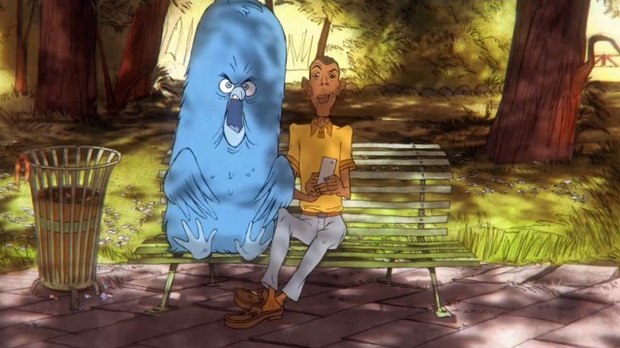 Academy Award-nominated filmmaker Sylvain Chomet (The Triplets of Belleville, The Illusionist) has directed a new animated music video for “Carmen,” a track by Rwandan-Belgian musician and rapper Stromae from his album Racine carrée.

The video, which is very much in Chomet's visual style, and draws on the 1800s opera by French composer Georges Bizet, features an animated Stromae being consumed by his Twitter addiction. What starts out as a lark soon becomes an all-encompassing compulsion that permeates every aspect of his life, from friendship to love.

Premiering on Buzzfeed on Tuesday, the video garnered over five million views in less than 24 hours. If you haven’t already seen it, check it out in the player below:

Produced at Th1ng, Chomet also served as lead animator on the project alongside Neil Boyle. Background layout was handled by Marcin Lichowski, while Kirk Hendry served as lead compositor and lighting designer.

Last year, Chomet directed a couch gag sequence for The Simpsons at the personal request of series creator Matt Groening, and the sequence continues to rack up views on YouTube. (You can read AWN’s Q&A with Chomet about the project here.)

Chomet most recently directed the live-action feature Attila Marcel, and is currently developing a live-action/animated hybrid feature, The Thousand Miles, which is based on unpublished writings and art by Italian director Federico Fellini. The film tells the story of a middle-aged count who participates in Le Mille Miglia (The Thousand Miles), an open-road car race that took place in Italy throughout the first half of the 20th century.